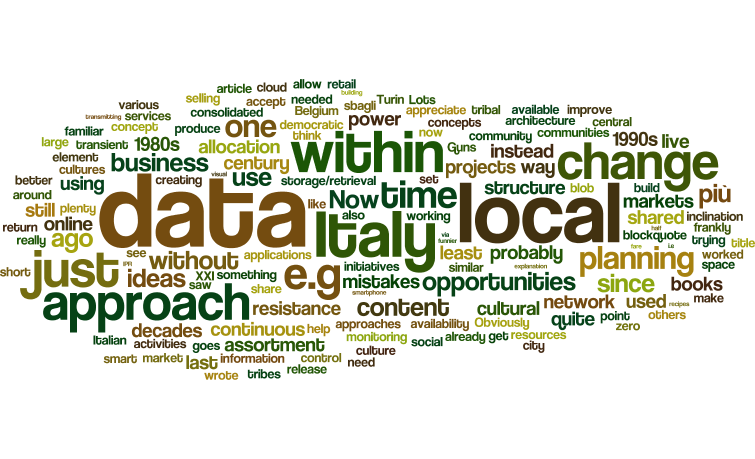 A short “cultural” introduction- then an explanation of the cryptic title- beware: this article is a provocation.

Currently I live in Italy, where I was born- but lived and worked abroad for a long time.

Moreover, since the 1980s, while still a teenager, I was exposed to other cultures and approaches to “commons”.

I shared in the past few cases, e.g. how in the 1990s I was told on what meant city development and projects in The Netherlands, and over the last few decades I saw similar “collaborative” (or at least “democratic”) urbanistic decision-making approaches spread around Europe.

Italy is gradually picking up the same approach.

Italy is, frankly, a tribal society- where even in large towns we split into tribes- I wrote about that often within the “political” side of this website.

Failure still carries a social stigma in Italy- so, we miss many learning opportunities and keep seeing more and more “encore” of the same mistakes.

But in the XXI century, if we were to accept a continuous trial-and-error approach, instead of trying to do each and every time a “big bang” (all immediately and with systemic synchronized swimming) we would at last start removing resistance to change.

Or… at least, avoid to build up resistance to change.

It is funnier in Italian, but the logic goes this way: if you do, chances are that you will make mistakes; if you do mistakes, the local culture first looks for a scapegoat, then for solution (or avoidance of a recurrence); hence… stay put and do nothing.

Obviously, resistance to change isn’t an Italian exclusive- but our inability to accept that failures too have a social value is quite cumbersome when coupled with a tribal culture, as any mistake affects not just you, but your role within your tribe/group/social circles and their “balance of power” (and credibility: “Mianzi”, saving face, is critical in Italy too, not just in Asian cultures) vs. other tribes.

What is interesting, is how it seems as if the XX century, and its mass-production approach, never really attuned to the local “one thousand bell-towers” cultural inclination of my fellow Italians, are, at last, giving way in the XXI century to a bewildering set of opportunities.

The “zero Km” movement probably makes more sense in a loosely centralized country such as Italy, than other more “structured” societies, as in our case we were already used to really live within subcommunities within communities- probably the “Palio di Siena” is a visual representation familiar to my non-Italian readers.

As I wrote since 2008, when I tried to resettle in Belgium after trying to return to Italy, I had two choices: get into that expensive quagmire that is IPR protection for an individual, or, having to re-build a business network, do just the opposite: share online whatever I delivered free-of-charge as part of my network building and “visibility retention/development” activities.

Few weeks ago, decided that this was the right time to release something that I had designed in the 1980s and used in various formats online, offline, and without computers since the 1990s.

Back then, the idea was to be able to share data structures and content without having to disclose either the database structure or the data content (or both).

You can find a description of the main concept on a mini-site that I released in early June 2019, https://robertolofaro.com/BookSite

But if you rather look at a video, it is available on YouTube, within my channel on change https://robertolofaro.com/ctr-channel

And if you prefer to just have a glance at concepts there is also an infographic on my https://slideshare.net/robertolofaro profile.

No, I did not yet invent a subliminal way to transfer ideas brain-to-brain… maybe within the next release!

Avoiding technicalities, the concept is quite simple:
1. build a bubble/universe (the data and its structure as a “ blob”)
2. make visible only the bare minimum needed to use standard ways to search for and store data
3. encrypt what is “internal”, i.e. will be accessed only via applications who “know” how to extract information from that “blob”.

Now, if you read online any of my books within the “Connecting the Dots” series, you will see a recurring theme.

As in Matrix: “Guns. Lots of Guns” (well, also in more recent movies with Keanu Reeves)

Only: “Data. Lots of data. Everywhere. Continuously. Without asking.”

Incidentally: while I would appreciate if somebody were to buy some copies of my books, the low price for the paper edition and the free availability of the electronic version of most books mean that, more than selling, my interested is in a) asserting prior use b) sharing ideas- if you are better than me at using them, you are welcome (but at least quoting the source would be nice).

This morning I was walking through the centre of Turin, and I remembered that there is another element that is still quite “alive-and-kicking” in Italy: local open-air street markets, selling everything from produce to clothing.

Anybody who worked with me knows that, while I appreciate a “storm of brains” (not just a pre-packaged brainstorm) about ideas, I like to deliver change (e.g. see https://robertolofaro.com/quplan for a fictional change programme that I started publishing few years ago, as a showcase of a set of principles that I applied in real-life projects and change initiatives).

So, ingredients (yes, I like cooking too, and making up recipes):
a. the data architecture and storage/retrieval approach described above
b. local markets and their side-effects (e.g. trashed produce due erroneous assortment planning)
c. the ubiquitous availability of storage space and computing power on a transient basis (no server needed: just think what happens when say 20-50 people, each one with a smartphone, goes to a marketplace and stays there for half a day to sell)
d. from January 1st 2020, each shopkeeper will have to use a cash register connected with the tax office in real-time
e. recently announced reforms in fees so that transactions below a certain amount will have zero commissions
f. smart city initiatives and the need to improve services and space allocation with dwindling revenue and business activities.

Now, in the 1990s, I was more than once involved in negotiations and projects on “assortment planning” within retail, and since the late 1980s in various industries “optimization of allocation of resources” failed on one element: missing reliable, live data.

There is one point I agree on with the local councillor working on innovation in Turin: with continuous streams of data, smart cities will be closer to airports- specifically, to airport malls.

Now, one application could be to use that data architecture to allow each local market to access services akin to those that decades ago were available only to large retail chains, to that, by monitoring in real time but confidentially data (using a “consolidation” model used already in Italy e.g. in banking cost control and benchmarking or risk reporting), instead of shuttling details to a central databank, at the local market level data could be processed, consolidated, compared with others, and help both sellers in each markets and others to improve planning, sales, and, of course, assortment planning and waste/traffic flows.

At the same time, having e.g. in each local community servers or shared storage/computing power as it was with the SETI project decades ago to process data, but using that data storage/retrieval approach to ensure confidentiality, you could have a “dropbox” approach (e.g. cars passing by could “drop” traffic or monitoring information), then consolidated locally and transmitted centrally to allow, again, better allocation of resources.

Everybody would now say “cloud”: but, frankly, what is the point of transmitting up to the cloud terabyte of local data that then would return mainly for local consumption, and creating a network capacity just for that?

Obviously, this would require a “billing” approach similar to the 1970s/1980s “time-sharing”, when sometimes you paid by lines printed, CPU minutes consumed, bytes stored, multiplied by time.

Now, to close this short article, let’s “unbundle” its title.

#democratic : no need of a command-and-control, control freak approach, only of “shared ethical standards” implemented probably directly within firmware

#data #centric : as it all revolves around the continuous stream of transient data that contain plenty of processing opportunities to help spot and anticipate local trends, but, again, without a central “pre-defined purpose”

#business at the #Edge : as it is a business

#circular #economy : and this is were the applications will be generated by interactions, once the infrastructure is there, a little bit as having electricity and running water enables plenty of uses, not just those planned by some Gosplan-oriented bureaucrat looking backward and planning a future that sounds familiar, instead of creating opportunities for ideas and concepts to emerge

#revitalizing #local #communities: if a local community has to thrive, it has to adapt.

For now, this is all for today…