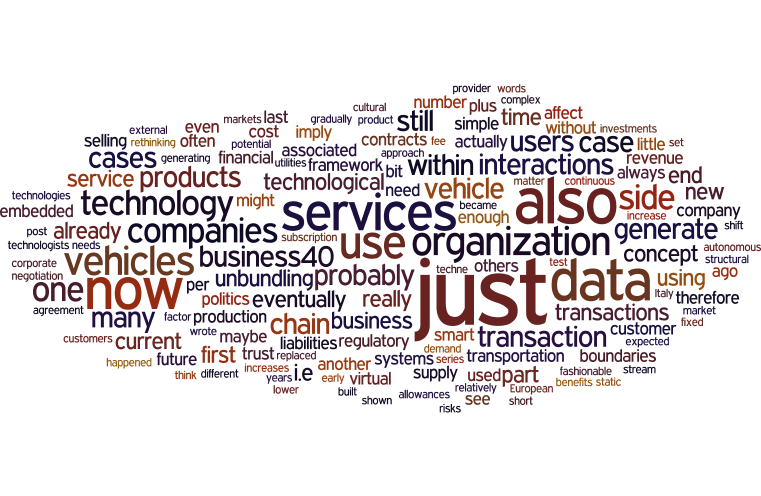 As you know, I keep writing that probably my background showed me a little bit too early the merits of a "systemic" approach.

A little bit too early, as back in the 1980s wasn't that all fashionable to say that things were at little bit more "complex" than just a matter of injecting some technology: but a self-built background in cultural anthropology, politics, and number crunching gave me no honest alternative.

As I wrote recently in this series: " I think that anybody who stays long enough in any organization, when moving to another organization, carries along some "cultural frameworking baggage" (and, often, removes knowledge from the original company)."

There is no "neutral" impact on corporate culture, whenever you change business processes or introduce new technologies (as the former doesn't necessarily imply the latter).

The obvious cases are ERP systems, GDPR, but also something as simple as introducing a POS terminal in a shop could have a transformative nature.

So, I will shift in this post from "technology" to "techne", its root (see a definition here https://en.wikipedia.org/wiki/Technology).

This series of articles on "rethinking business", started one year ago, is now well beyond the threshold when I usually publish a short "mini-book" (50-100 6"x" pages), but I will wait and share few posts more, for one simple reason.

When we talk about, say, business 4.0, Internet of Things, Machine Learning, and an assorted array of elements (ranging from technological artefacts, to concepts such as "sustainability"), we are actually talking about two sides of the same coin.

Paraphrasing somebody else, current technology could have been for technologists a while ago, but now and in the future, as it happened for other technologies when became embedded in everyday life...

...technology is and will be too important to be left to technologists.

So, as I wrote few days ago on Facebook: I was going to post yesterday evening, but was undecided if it was to be more business40 o more politics.

In the end, saw that it was both, so I will split it in few short sections- starting from the "business40 - technological" side

Therefore, I will focus here on the first part, business40.

In previous injections of technology, we were always thinking in terms of "boundaries"- even as late as in the 1990s, when I was selling methodologies, it was still sometimes difficult to help companies think that their "boundaries" weren't a filter toward reality.

The best an ordinary organization (not a monopolist or an oligopolist) could do was to "certify" how what happened within their own organization should be conveyed within what then was delivered outside, i.e. in products and services.

Stakeholders? Not so fast- it is really after the OECD Guidelines for Multinational Companies in the 1990s that that concept became common parlance.

Part of the lingo, but not always part of the action- deeds took a while to follow words, and still today "stakeholders" is often more a fashionable "catchall", than something with operational impacts.

With Cloud computing we de facto enabled any organization to scale up or down based on demand or plans, without affecting investments in fixed assets- and this is gradually extending to the physical world- e.g. many young people in Europe have a driving license, but do as until recently only companies did- i.e. "intermodal" transportation.

By foot, bicycle, motorbike, car, bus, high-speed train, airplane, even boat: they own none except the first, and use "assets" provided by others.

Potential benefits: as each vehicle will be continuously used, instead of being parked most of the time and replaced once every 2, 5, or even 10 plus years, fewer vehicles could be needed, but:

a. lower production runs with higher utilization without ownership imply a shift from selling a product to selling a use, i.e. a set of services

b. lower initial costs (e.g. a subscription) might generate a predictable and continuous revenue stream, for a larger customer base
c. in the end, if the entry cost (the subscription) is low enough, many will have one, also if will use it only when economically viable or needed- generating a customer base that doesn't require any production or support at all.

Example: let's say that you have a mobile phone agreement with a bundle- how many users consume completely their service allowances? how many companies buy service allowances "per employee" and have no "pooling agreement" so that users that use 10% will have their 90% spread across the others?

This "unbundling", already seen in various services (e.g. utilities) generate an additional result: if before you had one single provider (e.g. a public water company, or a car manufacturer, or a retail bank), now you have multiple parties that, in most cases, are invisible unless you look at the Total Cost of Ownership, and compare it with "the old times".

Then, you will discover that while apparently the service you receive (from virtual services, to product usages) is the same, the real cost over time eventually increases in most cases, faster than productivity (e.g. increase of bandwidth available, for my IT- and Telco-oriented frinds) should be expected to reduce it.

A digression? No, not really- an update on the concept of "boundaries".

Many companies still see Business40 in terms of "adding technology", others add also a "rethinking processes", but how many reconsider what would be the future of their organization in, say, 20 years?

When you virtualize products, services, infrastructure, turning it into a commodity that is shared, a kind of overhead that is re-allocated e.g. based upon revenue or a mix of factors to "incentivate" some corporate behaviors (such as investing in R&S, CSR, sustainability in their supply chain), are you confident that a structural size (and associated complexity, top-down) built for the 1950s is still an optimal allocation of resources for the 2020s and 2030s?

Currently, there is always a "static" side on any transaction- a negotiation, maybe now after selecting from an online catalogue, but with some back-and-forth steps linked to human intervention- maybe, just maybe, removing just the "negotiation" part when it is all managed internally (or you have enough leverage on your supply chain to be able to treat them as part of your organization).

In the future, probably this current "static" side will be replaced by "smart contracts" not just between companies, but also with end customers.

Actually, already Web 2.0 and now Business40 imply that customers aren't just buying what you sell, but also influence what is sold, how it is developed, and not just through market research- through direct intervention.

The concept is relatively simple, as I shared in July 2018: "Probably “smart contracts” (i.e. data flows with attached conditions for use and pricing) will become more the norm than the exception- generating the “unbundling” of every service, blurring the current distinction between B2B (Business-to-Business) and B2C (Business-to-Consumer). Further enhancements of services could actually enable in any transaction also C2B and C2C (respectively, Customer-to-Business and Customer-to-Customer) business models, potentially with marketplaces to enable demand and offer to meet."

What you need to make this massive restructuring work? Trust. A chain of trust. No, not just a blockchain, as the number of transactions per second will be massive, and current blockchain implementations aren't built up for frequencies such as those that, e.g. are managed by trading systems on financial markets.

The other side-effect of this "unbundling relationship and organizations" is that, once you have a "brand", any transaction will affect your "trustworthiness", with an approach similar to that still in its infancy now in China, and gradually expanding in few European countries.

Estonia is now testing the use of Artificial Intelligence within its judicial system, leaving anyway open the option to appeal to humans.

A first test case will probably be one or more implementation of the "smart city" concept, extended beyond the mere mobility, but covering also the production, storage, distribution of both energy and data.

Say that you are an autonomous vehicle producer that then both sells it "as is", or with varying degrees of virtualization, up to "standing fee plus per use".

Then, those data could be used to tailor interactions while using your vehicles- from what is shown by screens (no more windows, to increase structural security of vehicles, but screens as those proposed for window-less airplances), to how reactions to what is shown are stored and disseminated.

Those data could affect also optimization of different sets of needs and expectations: e.g. in case of delays, re-routing might need to factor the preferences of the users as a balancing act toward social needs.

And those data could actually be "stacked" in different layers of usefulness for the purposes of the "transaction": exactly as GDPR now stipulates for data collection.

And, last but not least, the interactions and balancing of choices might affect both offsetting the cost of the transportation of the passenger, and their revenue in case of data that eventually cathalize further development.

Nowadays this could seem science-fiction, but, frankly, beside the lack of "universal trust" and "agreed transaction profiling and storing mechanisms", in both cases just a matter of agreements, there is really nothing missing, from a technological perspective.

You have just to decide what goes where, and define a framework of reference.

For the time being, probably this "unbundling" will be just solved by stating that by using a vehicle, you pay a fee plus the value of the interactions while using the vehicle or the systems used to allocate the vehicles (apps, reservations, call centers, etc.)

But it is just to be expected that, when also a minimal company can access on the cloud and from online catalogues services and products that could be combined without any need for external consultants (and associated investments) into new services and products, eventually, as it is happening now in Italy with "virtual utilities" whose "virtuality" in some cases is now being paid by all the users, will generate requests for a regulatory framework.

The issue for traditional companies looking into the potential benefits of a business40 that isn't just dropping some bits of software and hardware here or there, but altering dramatically the internal and external supply chain (on both physical and virtual or electronic services) is therefore to assume that, eventually, we will be probably heading into a regulatory territory where the "last provider" is the one piling up all the risks and liabilities, and therefore will have to factor that into both contracts and service/product structure.

Another test case that is already discussed is about the liabilities associated with both minor and fatal accidents due to autonomous vehicles- and, in this case, the "transactions' structure" is for the time being fixed (e.g. a vehicle uses a software from supplier X, it isn't dynamically swapped with another according to market conditions), and therefore a "chain of trust" would be relatively easier to build.

In financial markets, or transactions conveying data, already over the last couple of decades with had more than once instance of "loss of credibility" due to the inability to comprehend the risks and liabilities embedded within some financial products (or matching such "bundles" with the ability to understand of both private and institutional customer).

Imagine that with a continuous stream of transactions also vehicle-to-vehicle, and the number of potential actors increases geometrically.

But the 2,000 words above where just a first segment focused on the "techne" side of business40.

Then, there is a "political" side- that isn't really just about "politics", it is about the cross-relationship and regulatory framework.

On that side, I will see it in another later this week, using the European Parliament within the (27?28?) EU and Regional elections in Italy.