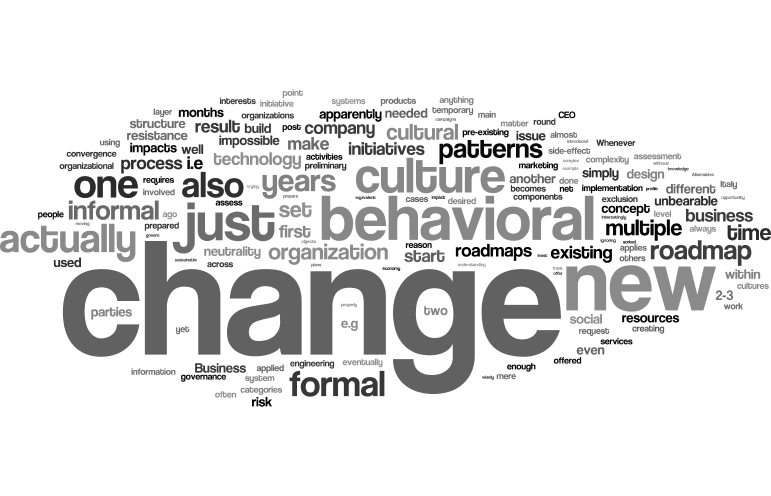 this posts isn't about change.

Or: it is about a specific issue of change.

Specifically, within behavioral change that isn't defined explicitly as such.

The issue? Timing and converging of timing.

Why the title? Will be explained at the end.

Whenever a "technology" (not just information technology- also a specialist process is a "technology") expands its impacts across multiple knowledge domains within any organization, it is not anymore just a matter of using a different set of tools, it requires a change in mindset.

It might be true that, when involving physical objects or infrastructure, a "small" change has a different level of complexity than a "large" change.

Albeit organizational complexity has an impact: the more complex an organization, the higher the chance that there will be an informal culture that overlaps the formal one.

Notably in some cultures, people are used to eventually find, within all the "formal" options, those that make their life easier.

When confronted with such a culture, in some cases the "solution" used is to actually set up shorter change timeframes, resulting in a "trial-and-error" routine that actually generates more resistance to change down the road.

Informal resistance to change: i.e. formally, each round of change is carried out, but at the informal culture level, each round is just considered yet another temporary nuisance.

As an example, just few months ago the "universal e-invoicing" in Italy was pushed onto those frankly less prepared for it, with the net result, intentional or otherwise, to highlight the weaknesses inherent in the selected methods to introduce that change.

It will eventually be sorted out- yet another half-baked bureaucratic reform that, in the short-term, backfires.

Avoidable? Yes- by first doing what, when offered the opportunity (and mandate) did elsewhere- first, spend time to assess the real formal and informal existing culture and what could be the impacts, then design the implementation of change.

Not the other way around.

But, to be frank, most already knew what was the existing culture- simply, designing a fail-proof system would have implied creating plenty of political side-effects.

Obviously, not always you can do that.

And that is the difference between engineering and social engineering: a social aggregate delivers more than just the sum of the actions of each one of its components.

You can have change initiatives where behavioral change is the main purpose.

Or such a behavioral change could be a side-effect of an apparently "technical" change, e.g. additional reporting requirements due to a change in compliance, introducing an ERP, or moving to the cloud.

Whatever the reason, behavioral change implies also working to remove resistance to change generated by prior attempts.

And, of course, their compounded impacts on both formal and informal culture.

Usually, "change" is identified as something affecting pre-existing organizations, but, if you adopt a cultural perspective, even startups, new joint activities, or simply new activities imply behavioral change.

It could have been a contribution of resources, skills, intellectual property, or even just relationships- nonetheless, there were multiple interests to converge- each one with its own concept of "future", i.e. its own "roadmap".

In any new activity or organization, the founding parties contribute their own cultural and social background, as well as the patterns that they derived from their experiences (or those that they were made aware of).

Between 3 and 6 months should be enough to identify which "cultural" elements each party brings to the table, and do a preliminary assessment.

If that is done across multiple layers of "circles of interests", it almost becomes an application of the Japanese approach "ringisho".

Or: it takes time, as each layer has to be "co-opted" in the decision-making (or at least "decision awareness") process.

Let's assume that just one layer is involved, then the point becomes: how long is needed to design a convergence toward the new desired target culture that should be implemented?

The interesting point is that this often applies to both existing and new organizations (temporary too), when multiple parties are involved.

Each case is unique.

But, in any change, what apparently had been solved in mere months, took 2-3 years to result in behavioral change.

I do not consider "behavioral" change the mere implementation of new formal habits- it has to include also the adoption of new "Pavlovian reflexes".

If a "new" organization works only when each member keeps referring to a formal structure, it is just a new paper-shuffling concoction.

Anyway, I am not the only one thinking in terms of "2-3 years cycles".

In Italy, over the latest 16 years, more than once I was offered to help start a new company- either to support others, or to define and then start the company.

Whenever I was asked to actually start a company, the request was always to be the CEO for two years.

And, actually, most business&marketing plans that I received (not those that I helped to prepare or prepared for others) had a 2-years exit strategy for... the founders.

Jokes aside, also in other change initiatives, usually 2-3 years was the time needed to develop and make fully sustainable both the formal and informal structure e.g. of new centre of excellence, or a partnership, or a repositioning.

The reason for each request to start a company, be the CEO for two years, and then transfer to somebody else?

Simple- two years, in any new initiative, is the minimum amount of time, in my experience, to build up a set of cultural and organizational patterns, as well as recruit and "blend" people.

Beside new initiatives, I applied that timeframe also in "recovery" or other interventions when behavioral change was required.

When a new structure (including a startup with multiple parties contributing) is set up, and when a whole process or information technology system is introduced, having a preliminary assessment is even more critical.

In both cases, what you are actually doing is "importing" one or more cultures, and creating a new one.

Within the desired change roadmap, you are actually overlapping one or more change roadmaps: unless that is done by design (i.e. following a conscious governance process), you actually risk generating interference.

Orchestrating the different roadmaps requires first and foremost to recognize them, and just relying on consultants that do not know your corporate culture well enough would result in a further roadmap added to their "main roadmap"- the one that they offer.

It is a matter of using time wisely.

And it is certainly wiser to focus first on understanding the cultural resources (implicit roadmaps and patterns) that you are considering to use to alter your pre-existing culture.

Alternative? You risk damaging your existing culture without getting any of the benefits you were supposed to "inherit" from the contributors.

A separate issue, but outside the scope of this post, is when actually you do not simply "import" team members, processes, systems to embed into your own, but when you add component services or products that are visible.

Each of those "ingredients" has not just its own culture, but also its own roadmap, a roadmap that will keep evolving- influencing also the perception of your own product or service.

Welcome to Business 4.0 world, when almost anything will be build up, as I wrote a decade ago, with the business equivalent of Lego(tm) bricks.

What is called "ingredient marketing" is not just for "Intel Inside"-style 1990s campaigns.

Behavioral change as a side-effect of non-behavioral change initiatives is often mismanaged by ignoring that all the "components" used to deliver such a change have their own behavioral "profile" and evolutionary patterns.

Despite what some proponents of "new ways" of doing business say, selling anything from technologies to behavioral training programmes, "unbearable impossible neutrality of (behavioral) change" means just that: neutrality of change is impossible, but such a concept is unbearable to many.

Reason? If you accept the concept, your potential market for behavioral change products, systems, services shrinks down.

In order to make it work, you would need to actually ensure that any organization "buying" into the initiative has "in house" the resources needed to properly assess and govern the roadmaps' convergence.

Interestingly, this applies also to other forms of behavioral change, e.g. those in post-M&A integration, and the risk that the actual governance is not on the side you would expect.