A new government and a live laboratory #Turin and #Rome 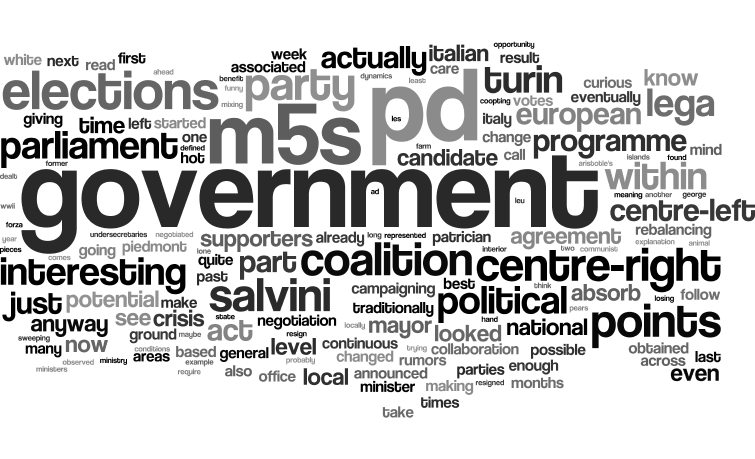 If you follow Italian news, you know that today a new government was announced.

It has been an unusual crisis, with few twists and turns, but I am quite confident that the most interesting part will start now.

The 29 points of the government programme can be read online (in Italian), but more than the points, it will be interesting to see how those points will be spread across the government.

Of course, some of the points are actually political points that will be under the care of the Parliament.

Anyway, it is the dynamics within the country associated with the government that is more interesting.

To make it simple, I will follow Aristotle's Poetics, and split the explanation.

This is just a short introductory post- stay tuned.

After the 2018 elections, we had a curious result.

Or: no coalition had enough votes to form a government, and therefore M5S (33%) looked with the second party, PD (19%).

After the negotiations with PD failed, M5S (33%) negotiated with Lega (17%): and defined an agreement.

Now, M5S formally isn't a political party- they call themselves "movement", and its supporters range from the right to the left.

After 14 months, as at the European Parliament elections Lega obtained 34% and 28 seats, thanks to the continuous campaigning of its leader, Salvini, who basically was campaigning for 14 months while supposedly being the Minister of Interior (there were in Italy many jokes about his consistency in being away from any office he gets elected or appointed to), it seemed an opportunity for various reasons for Salvini to pull the plug.

Or making impossible to make a different government, so that the President would have to call for general elections, and maybe Salvini could benefit from his 34%.

Summarizing all the melodrama after the European Parliament elections running across the aisle on a daily basis... would be pointless.

What matters, is the result: Salvini bluff bombed, he announced that was going to resign then changed his mind, so PM Conte resigned as that was the fastest was to send Salvini and his Lega ministers home.

So, M5S looked for another partner, and did again a negotiation with PD, this time successful, and joined also by Leu (a leftist party, mainly former members of PD).

Act II: Birth of a government

Yes, we have a government, but as it is based not just on a power sharing agreement but on a political agreement that is a joint programme, it could actually last longer.

And this creates some issues.

When the M5S-Lega government started, it looked as if the real plan was for M5S to eventually absorb centre-left, and Lega to absorb centre-right.

Even during the crisis, and as recently as few days ago, Salvini actually flip-flopped between resurrecting the centre-right coalition, and going "solo", and then coopting bits and pieces of the centre-right, trying to absorb at least parts of Forza Italia (Berlusconi's party).

At the same time, the last year saw a continuous stream of insults between PD and MS5, and at the local level not everybody understood where the negotiation was heading to.

As an example, just to talk about what I observed first hand, in Turin, where M5S obtained the Mayor in 2016, sweeping through areas traditionally associated with PD (or even its forerunner, the pre-1990s Communist Party), the rivalry is white hot.

But in other areas of Italy it was funny to see how in just one week both supporters of M5S and supporters of PD started a quick turnaround and "entente cordiale".

To avoid being left behind, eventually a delegation of PD of Piedmont went down in Rome asking that also the North should be represented within the government (meaning: themselves), and suggesting that one of those perceived as a potential candidate as Mayor of Turin at the next elections should... join the government as minister.

Interesting approach: first, declare that no collaboration is possible.

Then, rumors about the best candidate to take over Turin from M5S is Giorgis.

Then, state that collaboration is possible at the national level, but never locally.

Then, rumors about giving a Ministry to... the potential Mayor candidate (so that can become visible both at the national and local level, as he is anyway already part of the national structure of PD).

You can probably understand that I am quite curious about what's next.

Act III: Making the best with the cards that you are dealt with

And here comes the "live laboratory" within the title.

If you read the government programme, and know a little bit about past positions of PD and other political parties on the centre-left, you can actually see that many points within the programme are traditionally within the portfolio of PD ideas.

So, it will be interesting how the white hot competition will be kept in Turin, justified only by the interested in giving an office to those scheduled to take back both the city of Turin (M5S since 2016, after two decades of PD and its forerunners) and the region of Piedmont (centre-right from 2019).

Already this week, frankly some local reactions made me think to Paul Sartre, specifically "les mains sales", a story of party change of mind due to changed conditions more extreme than George Orwell "Animal Farm", but on the same line.

Times do change- a politician that hasn't turned into a patrician should be able to be ahead of times, not act as those lone soldiers found on small islands after WWII, who either did not know that the war had ended, or did not care.

Well, there will be now time to identify and appoint undersecretaries- typically used to counterbalance the balancing of ministries.

But it will require anyway some cooler heads that have a better crystal ball, not yesterday's patrician Zealots who react to losing ground by ensuring that they will lose more ground.