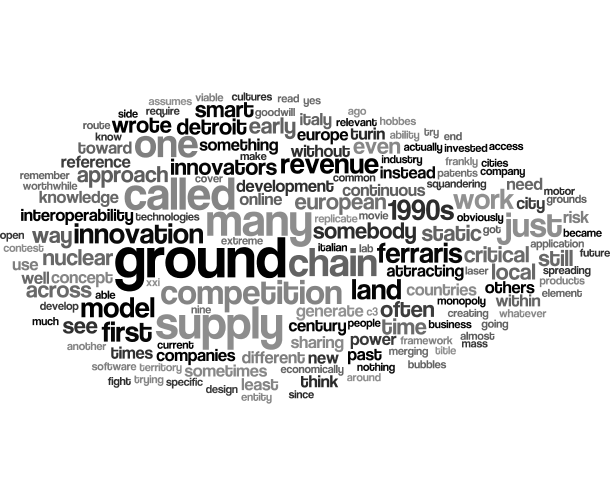 Somebody thinks that posting is just a quest for visibility.

Frankly, as I wrote long ago and then repeated few times...

...my scribblings online are just a translation for the XXI century of what I did with my network (mainly around Europe, but sometimes elsewhere) first tentatively in the 1980s, then professionally in the 1990s.

Actually- a "virtualization extreme": the matter isn't sharing for few known, is to share with the unknowns following a "first use" approach.

Moreover, writing online is a good "testing the waters" method for ideas, drafts, and "watered-down" versions of solutions, i.e. software, processes, etc: did so since the early 1990s with my network: if you really need a name, call it "sounding board meets quid quo pro".

And if somebody develops that into something worthwhile? Well, if I think that that suggestion will end up into a product that I could use, paying only per-use (or nothing at all), why not? I would have saved from the risk and need to procure resources.

As even if I were to have access to plenty of resources, I would still have to avoid spreading too thin.

Obviously, in software this is a lesson that is often forgotten- since the 1990s I crossed paths with too many companies jumping on anything that could elicit a preliminary "cool" response- often ending up being unable to finance the upkeep of all those "revenue streams" with the revenue generated.

Somebody would say: but "Google Graveyard" proves otherwise: well, how many Business-to-Business companies have the clout to tell their customers "you know, we are going to pull the plug to what last year, before you invested millions into development and training and embedding into your business, we said was going to become the next apple pie"?

Not that many- maybe not even all the time the GAFA quarted (you can guess who are).

Copyright and IPR protection often assume a "static" point of reference, almost a Taylor-esque concept (i.e. an expansion to the extreme, not "Taylorist", i.e. an application of Taylor's approach).

My reference in the title is to the "European Detroit" (Turin- or, at least, the "Italian Detroit"), so let's see the case of the automotive industry.

A small point: as I wrote in my CV, I prefer to say "automotive/mobility", as any vehicle that transports people or goods across whatever medium (yes, including water and space) is increasingly sharing methods, subsystems, and even parts of the supply chain.

E.g. if you are used to have some "infotainment features" while driving your own car, why should they be missing while e.g. using mass transit, a ship, a rent-a-fly car, or a spaceship?

And why not seamless integrate all of them so that you, as customer, can choose budget, speed, preferences, and then be offered a journey/experience across whatever makes sense, spreading the revenue across, instead of doing something close to what I did in the 1990s to travel across Europe (yes, before the Internet)?

When I read about "electrical mobility" and "smart cities", I think that we are again within the realm of "la cité idéale" (see https://fr.wikipedia.org/wiki/Cit%C3%A9_id%C3%A9ale)- not just Le Corbusier and other (less than ideal) utopias.

But what is needed to make such an entity work? Interoperability.

And interoperability requires at least harmonization of the interfaces between each subsystem (to enable multiple approaches to solve the same issues, so that there is a continuous potential for innovation through competition).

As you probably noticed, in the XXI century it is becoming more and more common to build "critical shared-knowledge mass" by doing what Galileo Ferraris (from nearby Turin) did over a century ago.

"Ferraris was a scientist, not an entrepreneur. He freely invited visitors to come in and see his lab. American AC pioneer William Stanley testifies seeing his work on the polyphase motor first hand in 1885. Instead of patenting his work, Ferraris did the opposite, he published it to the world. That is how he revealed his greatest single invention: the induction motor in 1888.

Ferraris was inspired by the work of previous pioneers: Walter Baily, Gaulard and Gibbs, Ganz Company and Ferranti. Ferraris himself became a leader and teacher of electric theory and design. He lead many organizations in Italy and was regarded as the foremost authority in electricity in Italy. One of his students Guido Pantaleoni went on to work for Westinghouse and be an instrumental link for licensing patents from Europe." (http://edisontechcenter.org/GalileoFerraris.html)

In our times, it usually happens the other way around- first patent, then license for free (as announced e.g. by Tesla in 2014 https://www.tesla.com/blog/all-our-patent-are-belong-you and Toyota in 2015 on fuel cell https://www.cnet.com/roadshow/news/toyota-kickstarting-fuel-cell-future-with-patent-release/ and 2019 on other technologies https://global.toyota/en/newsroom/corporate/27512455.html).

In the end, creating a common knowledge ground, notably one whose content and definition you initiate, is an application on Sun Tzu "nine grounds" (from https://web.mit.edu/~dcltdw/AOW/11.html):
" According to the rule of military operations, there are nine kinds of grounds. Where local interests fight among themselves on their own territory, this is called a ground of dissolution.

When you enter others' land but not deeply this is called light ground.

Land that would be advantageous to you if you got it and to opponents if they got it is called ground of contention.

Land where you and others can come and go is called a trafficked ground.

Land that is surrounded on three sides by competitors and would give the first to get it access to all the people on the continent is called intersecting ground.

When you enter deeply into others' land, past many cities and towns, this is called heavy ground.

When you traverse mountain forests, steep defiles, marshes, or any route difficult to travel, this is called bad ground.

When the way in is narrow and the way out is circuitous, so a small enemy force can strike you, even though your ground.

When you will survive if you fight quickly and perish if you do not, this is called dying ground."

If you are curious, you can read online at the link provided all the other remaining part, but what matters is: if you, as many, see business as kind of contest to compete, get ready for a constant shifting of the territory between those options.

Some still think in terms of a zero-sum contest, i.e. "mors tua, vita mea": but that is often an obsolete and "static" approach to competition- nothing is worse that overwinning (trying to annihilate competition) and its ancillary mindset that assumes that, once removed competition, you can enjoy your monopoly.

Shift any element, and you risk discovering that you became a Titanic that still assumes to be able to operate with the same flexibility of a rowboat.

Open sourcing your own patents sometimes is useful to turn yourself into a critical element in somebody else's supply chain, by influencing evolutions.

The flip side of the coin? Extend the concept too far, and you risk losing capabilities

As I wrote in the past, this is one of the many reasons why an Italian energy company, after all the nuclear power stations were shut down, invested in foreign companies, to retain the "knowledge supply chain", i.e. the ability to still develop and update those skills.

Other countries instead followed another route, e.g. developing the Laser industry, as the knowledge supply chain is similar to the one used to develop nuclear power stations and nuclear weapons (not my assumption- this was the explanation that I heard in Brussels at a conference about the local development, and its support to the transition toward peaceful uses of the South Africa's nuclear supply chain, through the African Laser Center https://www.africanlasercentre.net/).

When "destructuring" your supply chain (e.g. because "buy" is cheaper than "make"), sometimes adopting a too simple evaluation model sells future resilience for a present saving: how many countries did de-localize the development and production of components critical to their own critical national infrastructure?

Within the COMECON, I remember how my friends told me that, beside the central role of USSR (specifically, Russia), other countries received a fraction of the supply chain.

It was a form of control.

Well, we all know how the Gosplan ended- so, hopefully nobody would try to replicate it worldwide.

More interesting is another model, based on competition (or its variant "co-opetition", a derivative of game theory).

I will skip discussing the AC/DC debate- as it could sound as that joke in "Dogma" (the Kevin Smith movie): show everybody a movie with Charlton Heston playing Moses, and everybody is an instant theologist.

Switching to a more practical side: do you remember the time when GSM model had a different power adapted and powerplug?

Adapting to few standards had the side-effect of cutting a revenue stream for mobile phone manufacturers- but, at the same time, this simplified use of mobiles- worldwide.

In our times, we do not need to have "one size fits all" connections- we are able to be more flexible.

And the key issue in avoiding creating a "frozen in time" smart city (an oxymoron, frankly) is to enable interoperability without removing flexibility.

As I wrote this morning on Linkedin (sharing an article from a local newspaper): "#attracting and #fostering #innovation in #Turin (and, by extension, #Italy)?

Accept that more innovation evolving from the current monolithic and tribal approach requires different perception of reality: competition, not "one voice, one truth"

Moreover while trying to design the future, not to replicate the past..." (https://www.linkedin.com/posts/robertolofaro_attracting-fostering-innovation-activity-6564473585451233280-ZxM7)

Back to the title: #attracting #innovators and #merging #cultures - reinventing the European Detroit without squandering goodwill

A smart city that would like to be an "open smart city lab", and not just a specimen, will require a continuous supply of innovators- not just because they pass some fancical exam that marks them as "innovators" toward some static (or self-referential) innovation framework (a local habit, here).

But because the continuous ability to let "bubbles" surface and try to connect with other "bubbles" in new ways will generate new options.

A surefire way to kill this would be to "KPI it to death" too early and toward, again, a static framework of reference.

As I saw already in some specific industries between the early 1990s and early 2000s, the number of products and startups and concepts that will fail is not that much relevant.

And it is equally not that much relevant (or adequate) if something proposed is just economically viable.

It is not a new concept for some of my readers: but the idea is actually that the innovation engine will generate products and services that not necessarily are "economically viable" per se- but cover a micro-segment that the specific social model adopted considers "socially viable/desirable" (e.g. e-inclusion within the European Union https://ec.europa.eu/digital-single-market/en/digital-inclusion-better-eu-society).

What matters is to keep the wheels spinning and having at least a few that will cover the costs and generate worthwhile benefits.

Obviously, all this would require a different model of governance and funding.

Remember that, as a book about marketing online said over a decade ago... a dissatisfied customer (in this case, innovator) will share a negative experience more often than a satisfied one.