#Italy: #war of #attrition on #organized #crime and the #gentrification of the latter 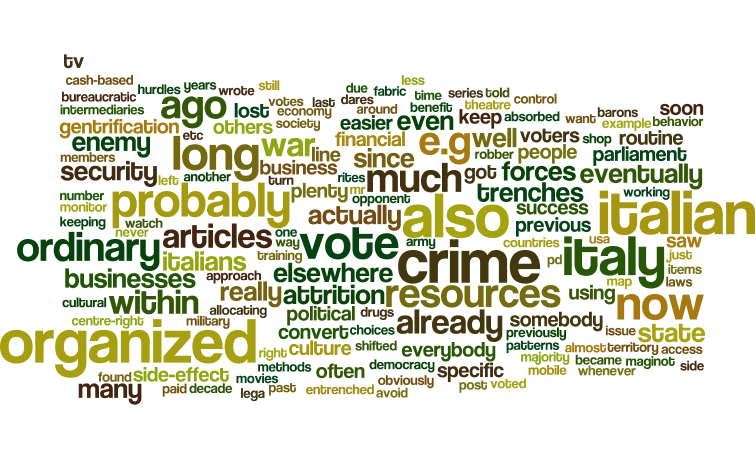 My EU and (soon a larger crowd, after Brexit) non-EU contacts in Brussels probably remember that often we discussed and I posted few articles about the themes contained within the title- since at least 2007 (online since 2008).

Now, most of those articles are currently offline, and most of the people I talked with are probably preparing to get back to UK (or already finished their mission, if they were from other countries).

As routinely, close to any election, we Italians have somebody claiming a "major success" on organized crime I would like to reiterate my perception of reality.

If you are in the trenches (that's what is a war of attrition), you can stick to old methods and habits only if also your enemy is in his own version of the trenches.

But if your enemy is more (upward, sideways) mobile, then you risk ending up as those French manning the Maginot line in WWII.

Moreover, if allocating resources to a specific campaign is more difficult to you than to your enemy.

The 2008 crisis in Italy started few years before: as I keep repeating in my posts since then, already 3-4 years earlier customers told me how they saw the middle class struggle to retain a façade of "everything is ordinary" by using loans to cover not investment, not exceptional items, but their everyday life.

Including keeping up with the same vacations routine that they could previously afford: everybody pretending as a coping mechanism.

In those conditions, organized crime, with its vast cash-equivalent resources, expanded its presence, and what was already visible in the early 2000s became even more widespread.

Not too long ago, at last there were discussions on the large increase in the number of cafés, restaurants, etc- all cash-based businesses, sometimes side-by-side, at a time when Italians' income contracted.

Undertone: how much of those not really economically viable enterprises are actually "cash cleaners"?

Between say almost three decades and one decade ago I said to my foreign friends what I learned from history: robber barons eventually generate too much revenue that is sustainable, also thanks to their initial ability to sweep out competition through unorthodox methods.

Up to a point when they too have so much at stake in a more or less working market economy, that start using "clean faces" to interact with "ordinary businesses", and prepare to turn themselves into ordinary businesses.

Now, the issue is: what do you do with "muscles"?

Some you convert (e.g. give them a shop to manage, as a sinecure).

Some you cannot convert- but could be useful elsewhere, e.g. volunteer for a spell doing missions abroad in the military, and then return.

Some you cannot at all convert- would never pass a psychological test or e.g. observation during a "term" within an ordinary army: and those could be "retired" in jail.

As somebody said to the ACLU in the USA long ago: instead of protesting against the NRA, why don't you take a membership card, and then, once you have the majority, vote it out of its existence?

Well, it is not just Italy that had an issue with former military using de facto training resources paid by the State to then turn into "trainers" and "recruiters" for forces whose purposes are not necessarily aligned with those of the State that paid for such training (e.g. as reported for Iraq: https://www.kurdistan24.net/en/news/e53fb490-b127-49f7-8c78-d9db0afe1409).

Once within the system, you can raise through the ranks: in most cases, security is obviously set to monitor outsiders, not insiders.

Once in a while there were arrests of member of security forces and Italian Army that actually in the "war of attrition" were working for the other side (I shared in the past articles): but, as I wrote over a decade ago, it is unfortunately a physiological side-effect of any long-term conflict, moreover whenever the enemy isn't clearly identified.

Just consider how many, all across richest countries, crossed the line between fighting corruption and drugs, to actually extracting benefits: Hollywood has a continuous stream of movies and fiction, but more worrying are books that described how it really works.

Organized crime, as also shown in the war on drugs, doesn't sit in trenches, doesn't wear insignia, and, due to access to significant financial resources, re-invests also through "gray zone" intermediaries, those who happily help in dealing with "white zone" intermediaries: so that everybody can claim to work in full compliance with Anti-Money Laundering, Know Your Customer, and a gazillion of other bureaucratic hurdles.

Bureaucratic hurdles that, as I wrote in past articles, cryptocurrencies and ICOs enable to easily and cheaply circumvent: how much does it cost to have somebody earning few USDs a month to "lend" papers and identity to "invest" into few financial instruments that are highly volatile, so that the recipient then buy products and services that maybe even don't exist at all, dissolving the financial flows absorbed into the "ordinary" economy at a negligeable cost?

There is another side-effect of a war of attrition (and I apologize with those who read this in probably a couple of dozen of articles from and since 2008): as I saw in my cultural and organizational change activities, the more cohesive is the culture of your opponent, the more mobile, the easier is that, slowly, some elements of their culture will intrude into yours.

It is a "viral" element.

In Italy, we had plenty of movies about organized crime, and TV series with a varying degree of success.

Now that I live in Italy full-time since 2012, whenever I went around Italy (Turin but also occasionally Milan, last year also Bologna, and previously also in Rome and elsewhere), I found here and there kids mimicking behavior that I found unusual- until I saw in movie theatres the promo for the TV series "Gomorra".

Call me whatever you want: but if you repeat long enough a specific behavior, or if you observe it long enough but then becomes part of common discourse, ditto for linguistic variances, eventually is "absorbed" into your own "business as usual".

I do not watch TV- I prefer to choose when, how, for how long, and what I watch. So, as a friend told me long ago, I am probably missing many other cultural references: but usually on the job I met people who eventually explained the sources of specific items.

Now, if you merge our Italian culture that notoriously is seeing the state as "other" (probably a side-effect of our territory being a kind of battlefield for others for too many centuries), the Italian State still lacks a cohesion available elsewhere, and our democracy here and there often has (left and right) bits of communication patterns that are a leftover of fascism.

As an example: when we disagree with a political opponent, left and right and center in Italy eventually the discussion shifts from the political message, to inherent failures of character, or even, echoing Lombroso, supposed physical or intellectual inabilities of anybody who dares to vote in a different way from us.

It is curious when you see e.g. a map of voting patterns during the previous European Parliament elections, when Mr. Renzi and PD (I voted for them) got over 40%, and the Italian map was all red, to the latest one, when Mr. Salving and his Lega (I never voted for them) got... around that.

Now, let's say that some previous voters did not vote, and previous non voters did vote, and others shifted from, say, M5S and centre-right to Lega.

Still, in a democracy the majority of voters wins.

And you cannot (should not) say that suddenly everybody became crazy.

It is way too easy: as this avoids e.g. PD asking itself how getting half of what it got before can be called "a success"- and thinking how to recover those lost votes (doesn't matter if they returned to the centre-right, shifted elsewhere, or simply decided not to vote: a lost vote is a lost vote).

The same applies to "gentrification" of organized crime.

We keep having our "antimafia rites": on the anniversary of killings of members of the security forces or magistrates there are plenty of speeches- but almost nobody dares to compare how much organized crime was entrenched then within the fabric of Italian society, and how much it affects now markets, business choices, and even political choices (it is a routine worth Greek theatre to outcry the "purchase" or transfer of blocks of votes).

Probably it is too late to avoid a bit of gentrification, i.e. part of organized crime, or its supporting "grey" areas, are already so entrenched within the fabric of society that are really akin to XIX century USA robber barons.

But this does not imply a surrender, or expanding on rites to fight yesterday's battle (another routine of Italian politics).

Italians already surrendered many liberties with the excuse of fights against Italian terrorists, organized crime, and plenty of others- with tools that in the end affect more ordinary citizens than more or less well connected and well informed criminals.

Extending cashless payments and, as I proposed long ago, a reasonable approach to bookkeeping-less to monitor real time cash-based businesses is forthcoming (due January 1st for any shop).

The point is probably now to do a triaging of reforms and restructuring of all the overall structure of security forces and territorial control in Italy, to avoid keeping allocating resources to trenches that are our Maginot line, while our opponents nimbler (and with faster access to resources when needed) are... flying over with drones (and soon robots- I do expect robot submarines and other application of autonomous, but untraceable, driving to integrate with IoT in Italian towns soon).

It would obviously be easier if we Italians were to accept that individuals' cooperation in territory control would make it easier- but I prefer to be pragmatic.

I do not belong to any "tribe" or group, so I do not really care who is going to benefit.

Frankly, it is also my "systemic" approach that I used in business (often, I was considered more "corporate" than most Italian employees).

As an example, we do complain a lot about the sheer number of laws. And our Parliament as well as local authorities keep churning out new laws.

But, in our times, this could actually become a benefit. I will share tomorrow in a post on the https://robertolofaro.com/rethinking-business side why.

Also, I will discuss in a later post why I find ludicrous when people say that they want "competent" Members of the Parliament, Mayors, etc.

Have a nice Friday!