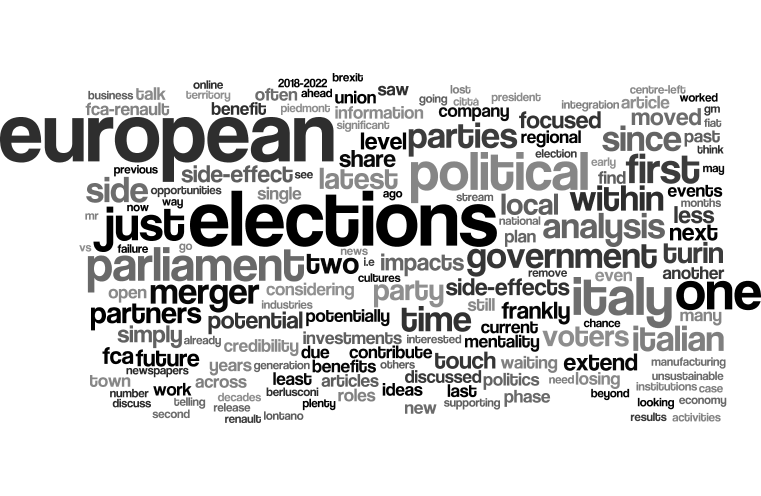 Two events occurred during the night between May 27th and May 28th, both with present and future impacts on Turin, Piedmont, and probably Italy and other areas in Europe and beyond.

The first event is the expected (at least by me) results of the European Parliament elections, as well as the the Regional (in Piedmont) elections.

The second event is the announce from FCA that the company is seeking to do a merger of equals with Renault (my preference would be to extend it to the Asian partners).

I shared my first impressions on both within the latest article of the "#RegionaliPiemonte and #EuropeanParliament2019 during #Brexit series".

Then decided to wait for the following week-end (today), to see what other news would arrive.

In this case, I think that clarity, a preamble to further analysis, can benefit from the latter.

So, I will discuss the impacts of the Regional elections and the potential FCA-Renault&partners merger on the local economy in future articles.

For the time being, I just "tested" some ideas with friends, relatives, and acquaintances- I will share here few of those ideas, and others that I still haven't had the opportunity to discuss face-to-face.

Anyway, for the curious, at the bottom of this article I added a section about "What will not be discussed here", just to include an outline of my ideas about the two events- "talking straight" Dutch style as I learned in Belgium and The Netherlands while living in Brussels, to keep it short.

This week saw a continuous stream of news related to both events, plus the side-effects at the national level of the European Parliament elections.

European Parliament elections side-effect number one: one of the two political parties within the Italian Government doubled vs. the latest general elections, and the other had a significant cut (some discussions on newspaper reported that about 6 million votes shifted between the two government partners).

It has been months since the Italian Government lost his Minister for European Affairs, and nobody has been yet identified to replace him.

Considering that, due to the elections and due to Brexit, there will be both a continous stream of negotiations and a re-arrangement of the affairs across the European Union, this per se would set us Italian into a weak position.

But, frankly, when my political side (centre-left), now at the opposition, states that it is a shame, talks about credibility, etc, I would like to remember how we lost our credibility long ago- and pushing routinely onto the following government unbelievable and unsustainable targets is a routine that has been done by most of the recent governments in this decade and the previous one.

Have a look at this June 2018 article, as "creative accounting", when it meets politics, is a powerful drug.

We need to get used to the idea that "looking good on paper" isn't what matters- the credibility is not of a single government in a single point in time, but of the whole country...

In Italy, as I wrote few times in the past, unfortunately we have a spoils system that extends across the structure, also to roles and positions that extend beyond an electoral cycle.

One side-effect is that often (and not just with the current government) we had also "technical" parts of the State bureaucracy delivering advice or supporting decisions that were simply not workable.

Frankly, this is a sign of political immaturity, and what we call in Italy "provincialismo", a confusion of roles.

It is true that we will have way too many elected representatives that potentially will be "out of the game", but, frankly, this should be cause for some rethinking from those who moved from over 40% to less than 23% in a single European Parliament election: why?

And, please, do not tell me that, having moved from that 40% at the previous European Parliament election to 18% at the latest general elections, less than 23% is a success of the new secretary and president of the PD...

If compounded with a meager showing of voters at the polls of less than 55% (in my first elections as a voter, in 1983, it was 88%), it shows that voters did not bother to vote...

In my past business activities, I had the chance to work with senior managers across multiple industries and cultures since my early 20s.

At the same time, due to family background and personal interests, even before that I had the chance to observe before was 18, and then participate actively since I was 17 in political activities in Italy and abroad.

In both environments, you have to move or share your analysis before information is complete- waiting for perfect information is a self-defeating choice.

Side-effect: the earlier you move or share your analysis, the higher the potential for failure.

Failure can come in at least three shapes:
1.your analysis was correct at the time (but will not be later, notably when other parties or competitors were to act on their own assumptions)
2.you did not have a significant bit of information
3.plain and simply- your analysis was wrong.

So, one of the first steps in any analysis is... to define its scope.

As you can see, I foresee more benefits (and I am not the only one) if the merger were to extend to all the partners, as each one could contribute different elements and offset (at least for FCA) many investments that were planned within the 2018-2022 plan as announced in July 2018.

At the same time, it would take few dozen pages to share and explain what I could summarize as "Torino città aperta" (i.e. an open city) that could result from such a M&A going ahead.

And yes, in that case, beside Turin, the benefits would extend potentially to the aggregate of Piedmont-Liguria-Lombardy, not just in manufacturing, leveraging on the strengths of each territory.

As the M&A (more difficult to justify if just FCA-Renault) would increase the value of local investments that are currently being supported and initiated, remove some quarrels about which one makes sense on the industrial side (in Turin, in my view both the manufacturing center and the support to the restructuring of specific industries, e.g. automotive; but we have to fund it in a creative way), and create a sustainable demand for the local "knowledge supply chain" that saw massive investments over the last few years.

And, at last, remove the Macondo-style company town mentality that still lingers in Turin, a mentality that, with its ancillary side-effects (pandemic gossip and "leaky" confidentiality being the most visible), was only aggravated by the latest couple of decades focused on developing mainly the centre of the town and the "wining&dining town" with its supporting services, something useful for the few but bringing about decay for the many who moved from having opportunities to work in higher-paid jobs, to shops-based "gig economy".

The GM-FIAT acquisition that wasn't (signed in 2000, scuttled in 2005) had marginal impacts locally, but the FIAT-Chrysler integration already shattered some habits, albeit still requires further work to reap all the benefits.

Integrating with the French and Japanese mentality could actually open up opportunities.

And this obviously defines what you will not find here (but might appear in future posts).

What will not be discussed here

first: on the political side

I will not talk about the winners and losers within Italian Political parties- neither at the national level, nor at the local level: that would be for another time, and you can find online Italian newspapers telling you what they think.

In Italy, each political party (and voters) seem to be focused on telling all the others what they should do- and it has been few decades since "us vs. them" has replaced political discourse.

I prefer to talk about my side (centre-left), to write what I said often in Turin since I re-registered in Italy in 2012, as since Mr. Berlusconi entered politics in the early 1990s, the former communist party supposedly moved to the centre, but, frankly, simply "onboarded" anybody looking for a party and opposing Mr. Berlusconi.

To me, it seems that the current leadership of "my side" is more focused on preparing for the next phase of the takeover of the Democratic Party by those who were not part of its original history, than on getting back in touch with reality (and voters).

At the regional and local level, currently there is plenty of discussion about the need to "open access to representative politics to a younger generation": and when were they prepared for their new roles, as even the latest elections saw that those sitting there over the last 20 years focused more on keeping in office those they worked with in the past, than onboarding and coaching the next generation?

second: on the business side

Another issue I will not talk about is who is going to benefit financially from the FCA-Renault combination: to that end, there are plenty of articles online, and you will find a wild range of values and assumptions.

I would like just to add a remark: a merger of any size is a cultural change (and I worked with and for most of the cultures potentially involved).

FIAT has already had an unsuccessful integration with another larger company before (if you consider Renault&partners as an aggregate), with GM in 2000 (scuttled in 2004, with formal release in February 2005) between GM and FIAT.

A pre-emptive self-valuation releasing the 2.5bln EUR discussed on newspapers could deliver a short-term benefit to current FCA shareholders, instead of waiting few months for the results and impacts of the first phase of the implementation of the 2018-2022 plan, presented just one year ago (i.e. waiting for the 2018 and first semester 2019 accounts).

But considering considering the product and technology lineup that both parties can contribute to provide for the future value that the merger could release, even with the M&A were to go ahead, this could have long-term negative side-effects.

An unworkable or unsustainable merger could imply having the new entity selling FCA brands to interested parties, simply transferring outside Italy the responsibility for phasing out a 100 years history- the much feared "spezzatino", but... "lontano dagli occhi, lontano dal cuore".