Luckily, as actually while living in Brussels I posted a few more since 2007 and, before then, the concept was also part of the online e-zine on change that published between 2003 and 2005.

Last week, I posted a kind of "signpost", an article that was actually a condensed minibooks: at over 11,000 words, I considered to release that draft as a minibook, but then, as it contained plenty of links and references to other articles (I avoided to reference too much to minibooks on change that published since 2012), decided that it was better to keep it here, for now.

In this article, that I hope to keep short, plan to reference only the latest one, and three more, as a background to the title.

...let's do it visually, shall we? To move the fast forward.

The latest article was: "Three centuries in a month and moving forward: #Italy, #EU, and #COVID19"

But specifically on "assessing systemically" posted a 3-articles, loosely connected series between September and December 2019. 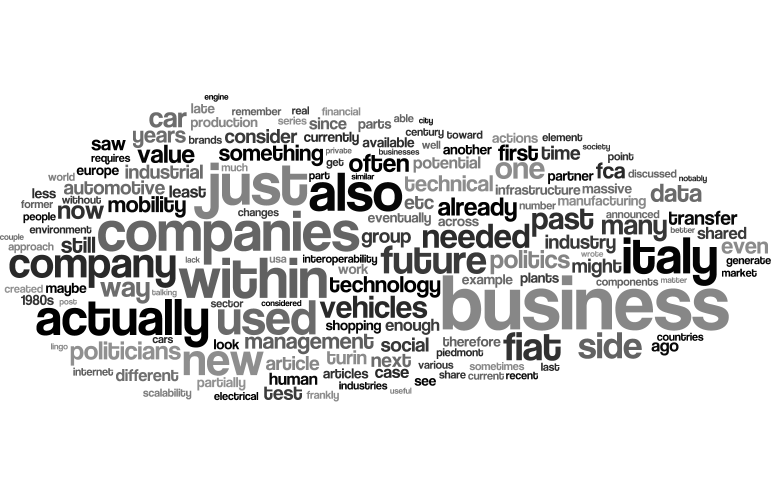 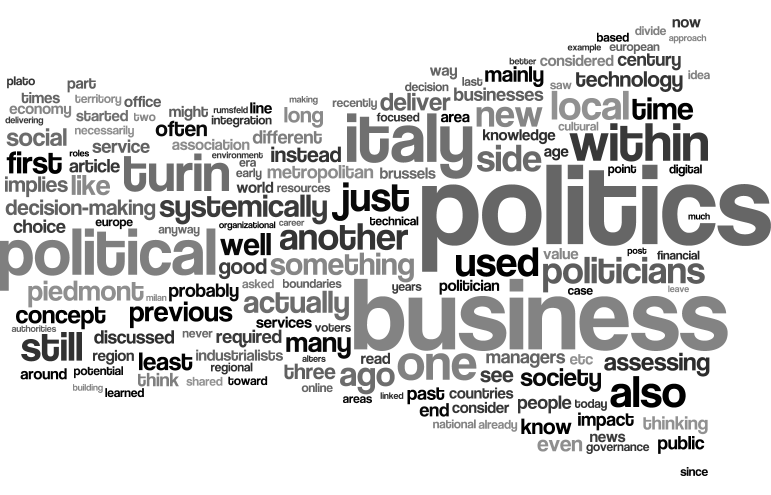 "Assessing systemically: the data side of #European #Union #integration within #digital #transformation" 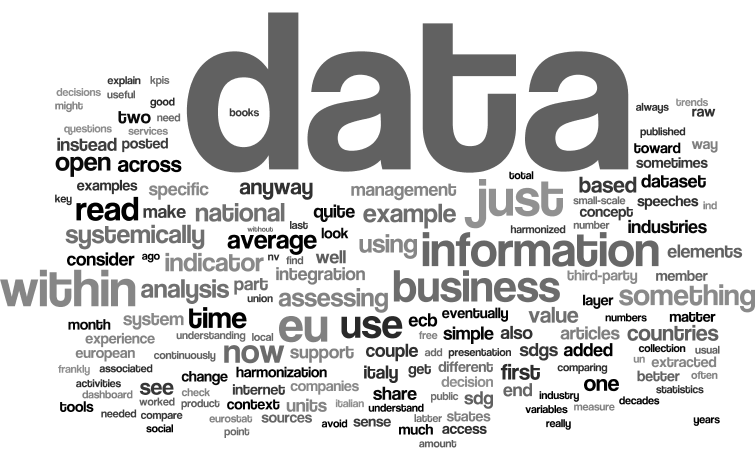 If you want to read what I meant... have a look at those articles.

I think that anyway the progression of the pictures represents quite well what I consider "systemic" in the XXI century: business, politics, and... data, plenty of data.

What do I mean by "systemically"?

Certainly, involving all those that are affected.

But, as I discussed decades ago while supporting a negotiation to import in Italy a risk management/reporting solution from UK (back then countries with a different approach toward collecting risk data, and ensuing data quality), "systemic" implies also "contextual".

As an example, a construction company in location A catering mainly for few large businesses and another one in location B whose customers are mainly a "cloud" of small retailers might be apparently within the same industry (e.g. share the same industrialists' association membership, have the same industry code at the Chamber of Commerce)- but might have a completely different risk profile.

If you read some of my past writings, you know that sometimes I wrote about "circles"- it is akin to when you studied astronomy: while an astrologist might tell you that a distant constellation has influence on your behavior, if you are living on Earth you probably bother more about electromagnetic waves from our star in the neighborhood or Sun and Moon impact on tidal waves

No, I am not suggesting to read those articles on Wikipedia... just consider that, in a real systemic view, you have to look both inside and outside.

And "inside" and "outside" might impact in different way your short-, medium-, and long-term approaches to cope with reality.

Now, getting back to business, politics, data: there is no industrialized country that can ignore what others are doing- including while planning for the next phase in managing the impacts of COVID-19 so far, and what will be needed to get back to a new normal.

Look e.g. at how changed the content of the material (speeches, articles, interviews, etc) published by the ECB where "crisis" was a common item between 1997 and 2020 (here is my log list, with links to individual posts on the ECB website).

Considering what I saw in recent and distant past in Italy and around Europe in terms of supply chain (virtual, as in services and banking, and physical, as in manufacturing and retail), I think that we will not get back to the old normal, and I am not the only one.

To stay on the ECB (as automotive, banking, retail are the industries where I worked most often since the 1980s) look at more recent interviews in April 2020 by Christine Lagarde and Luis De Guindos, or the post released on 2020-03-19.

They all clearly outline a long, long repositioning, more than a mere recovery and "back to the business as usual".

And, anyway, also what now, in comparison, seems to be something limited to a "financial markets impacts", the 2008 crisis, actually impacted on real businesses, and create plenty of regulatory interventions.

So, "systemic" has to assume a clear understanding (or as clear as possible) of what, to paraphrase, is within your own "controlled environment", can be brought into it, or you can just learn to cope with as it is.

As I keep repeating, data show that most Italian companies are on the small size of small.

This has an obvious impact on their organizational capabilities, and also in corporate culture.

Research facilities that generate more than your marketing and production side can convert into products, and building an IPR management (to sell) would probably conflict with the inclination to keep in house what is invented locally, also if the company could benefit more by licensing or transferring to a third party (or even a competitor) more able to extract value.

I think that our current crisis, at least in Italy, but from what I read also in other EU countries, acted as a catalyst to show the structural weakness of our model if we want to, again, extract value from the third element of XXI century development, data.

Just look at this representation from the Going Digital side of the OECD. 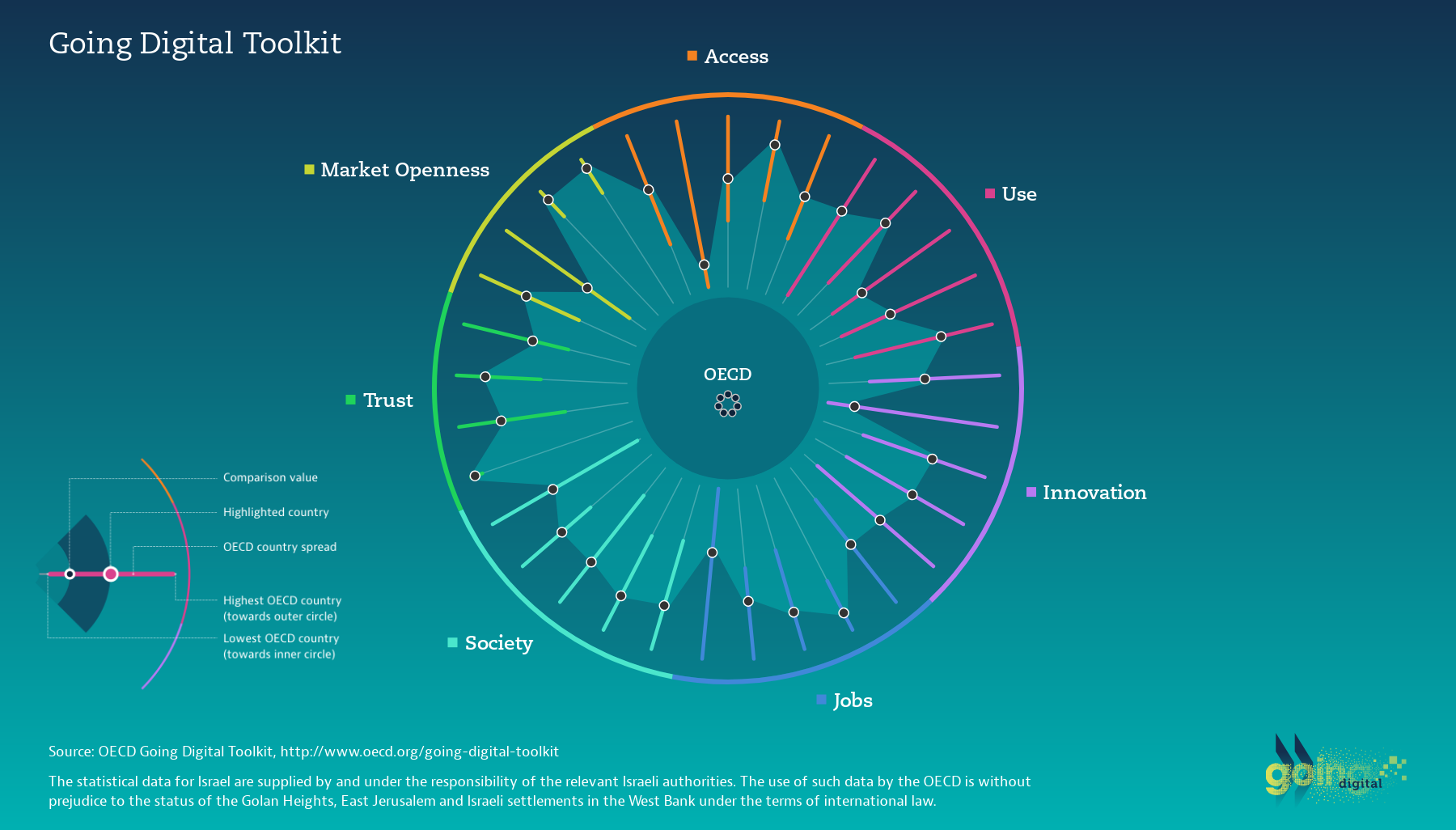 I will compare that just with Italy: few lights (i.e. better-than-OECD), but overall a collection of weaknesses. 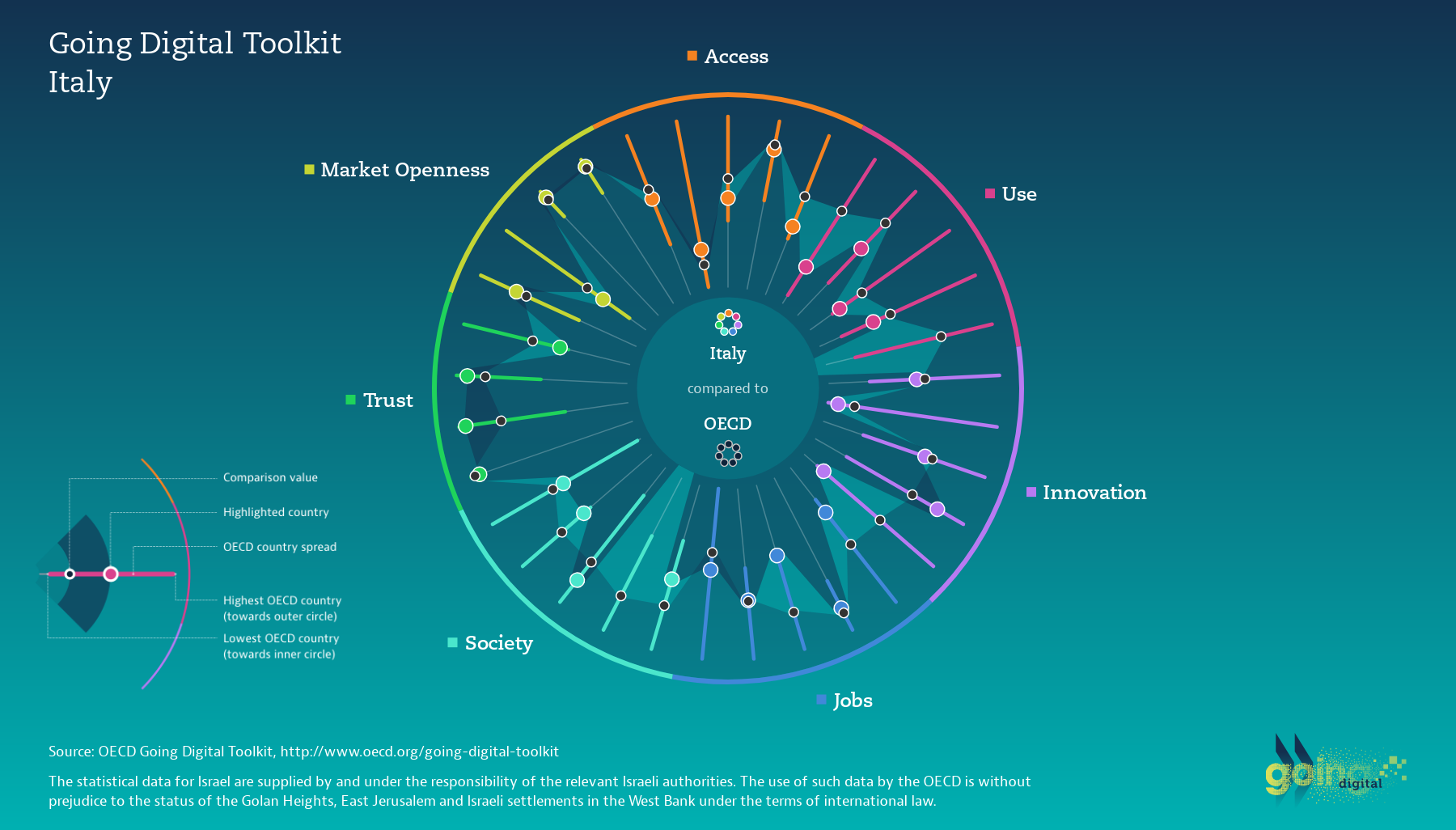 Currently, the crisis is inspiring many to use private data in such a way that would have conflicted with e.g. GDPR (see a sample collection what I wrote on privacy before).

Moving forward, as the proper "phase 2" will require continuous monitoring and cross-referencing of massive amounts of data, it is to be expected that some of the "temporary measures" will turn in Italy into permanent fixtures of reality.

As the saying goes, in Italy there is nothing more permanent than "temporary measures": until recently, our gasoline price still embedded temporary taxes, including one set up in 1935-1936 for a colonial war (I did remember a previous one about an early XX century colonial war, but apparently either was removed, or I was wrong).

Now, let's then assume that some "temporary measures" will need at least to scale up to volume, when almost everybody will start going around, and therefore data flows will grow up exponentially.

This is a clear call for artificial intelligence, both to protect privacy in a country where leaks are routine (e.g. recently somebody had no better idea than share material after a control on the compliance of a citizen on the "limited travel" measures- yes, it was funny; but it should have been neither shared nor stored).

Well, have a look at this picture about average AI skills penetration in OECD countries 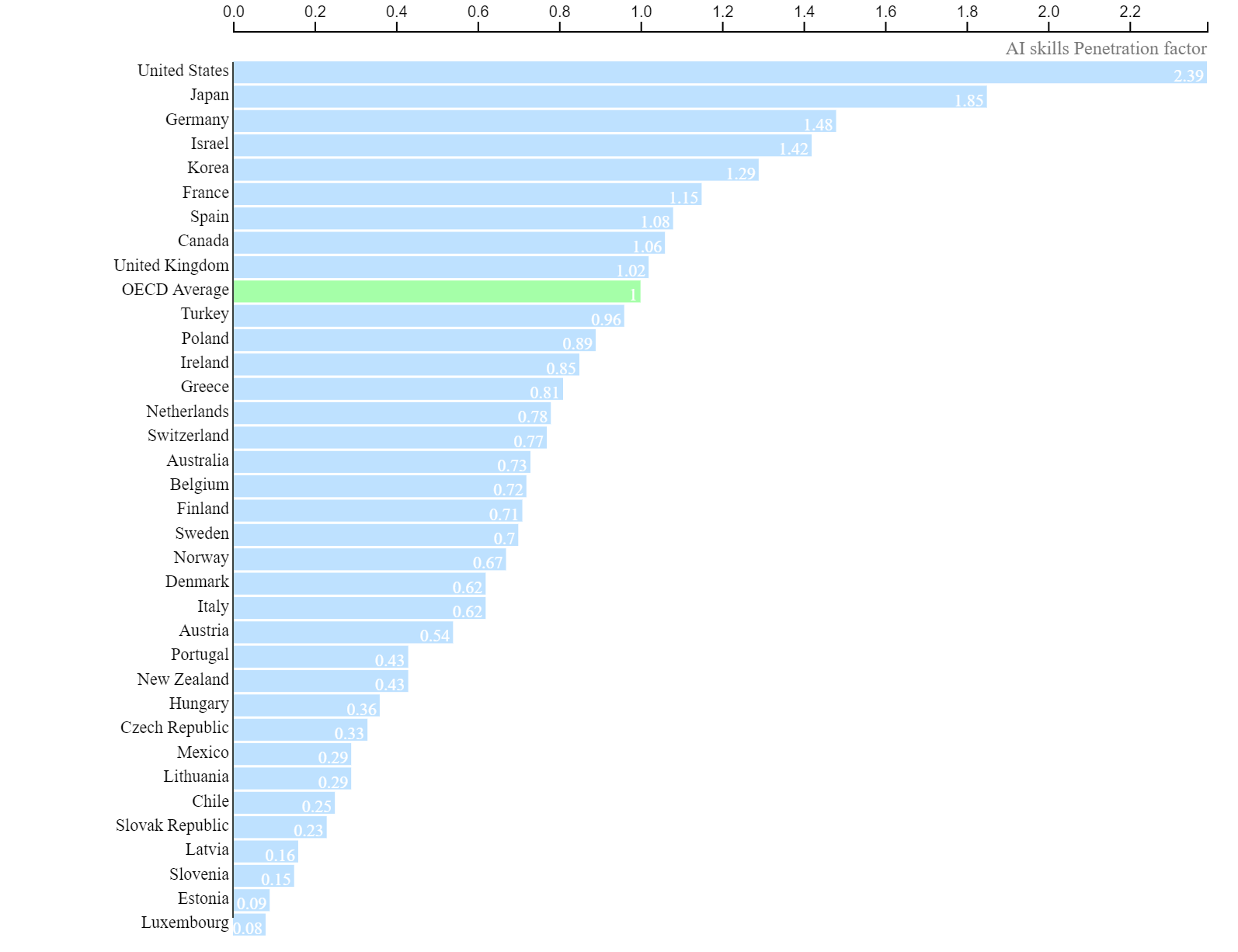 And now look at how well Italy is faring in retaining (expensively trained and groomed) talent, 2015-2018 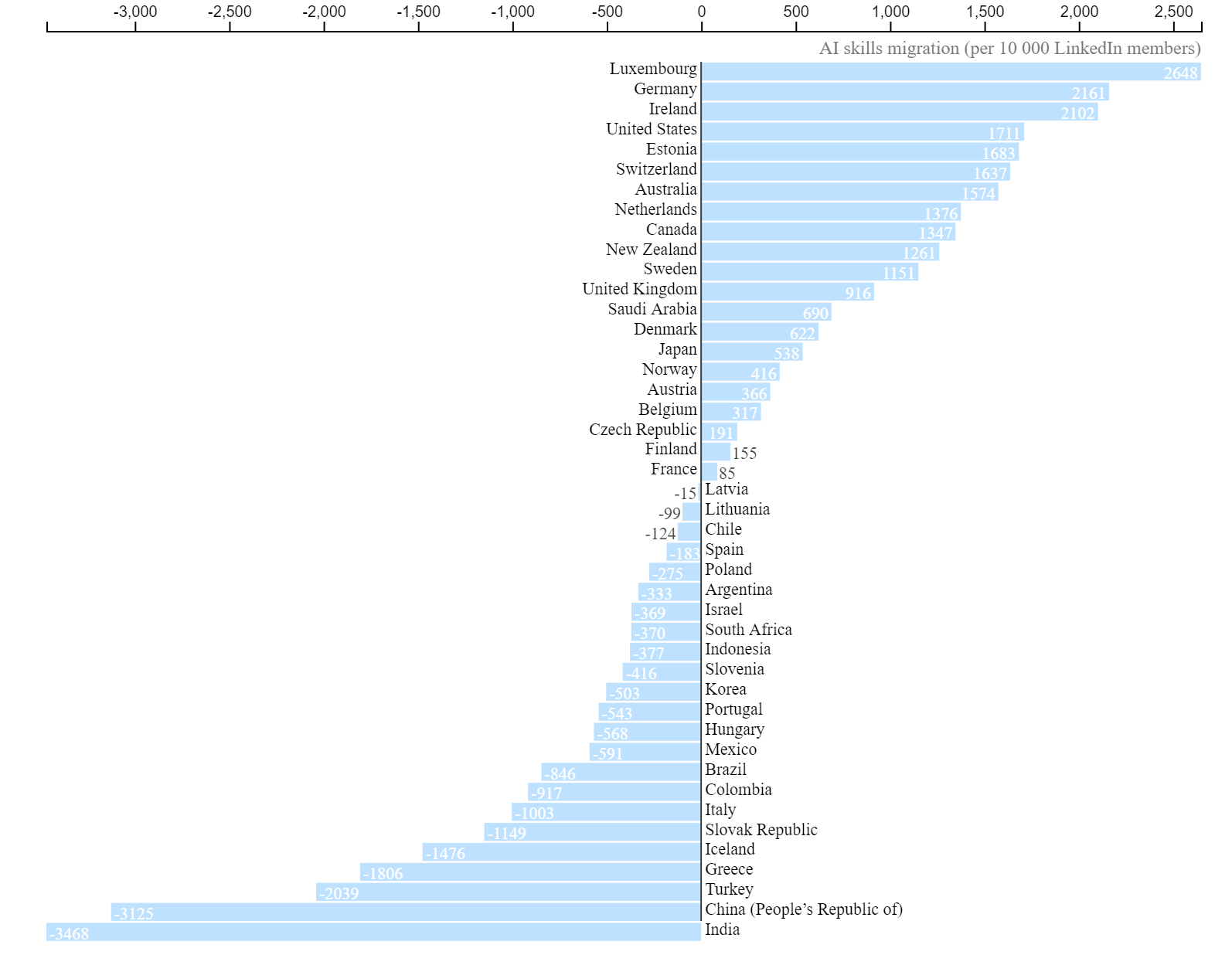 The current crisis, including its contraction of the already limited number of opportunities after the usual allocation by tribal link, will probably add another dimension in Italy...

...extended brain drain exactly when those in their 20s and 30s would be needed here to seed the next management generation.

I shared on Linkedin and Facebook this morning my commentary on a local initiative to design a plan for "phase 2", while this afternoon there should be the first press release from a national research group recently appointed by the Government to propose a plan for "phase 2".

My hope is that eventually, they (and other similar initiatives that are sprouting as mushrooms around Italy) will converge.

Personally, as I wrote this morning, I think that, beside a national guideline (such as opening but then seeing which limitations to apply if monitoring reveals such a need), and oversight from national health authorities, the approach designed e.g. by FCA with trades unions and others should be taken as a reference by the various trades associations and trades unions, to see what could be applied to their own associates.

Now that the new measures require a 2mt distance between individuals at all times, frankly most shops (and many offices and, in smaller companies, also the factory floor) it is even more doubtful that will be able to safely return to work, unless they undergo significant structural intervention- both in their physical structures and operational processes.

If you want what is needed now, cultural and organizational change, you have to listen to those who are operationally involved.

In this case, shouldn't operational rules defined by those at the operational level: health, business, workers, and their operational partners?

My view from experience in change is that having a high-in-the-sky committee, listening to itself, deciding operational measures (as what I read this morning) is a recipe for either irrelevance or disaster.

Notably when, as now, we will have to redesign whole supply chains (if in some areas 95% of the companies are small, and more than a few will take time before they will be able to comply with the new "safety guidelines", both their customer and their suppliers will have to re-arrange their own supply chains).

In business change parlance: a camel is a horse designed by a committee...