Century of the commons 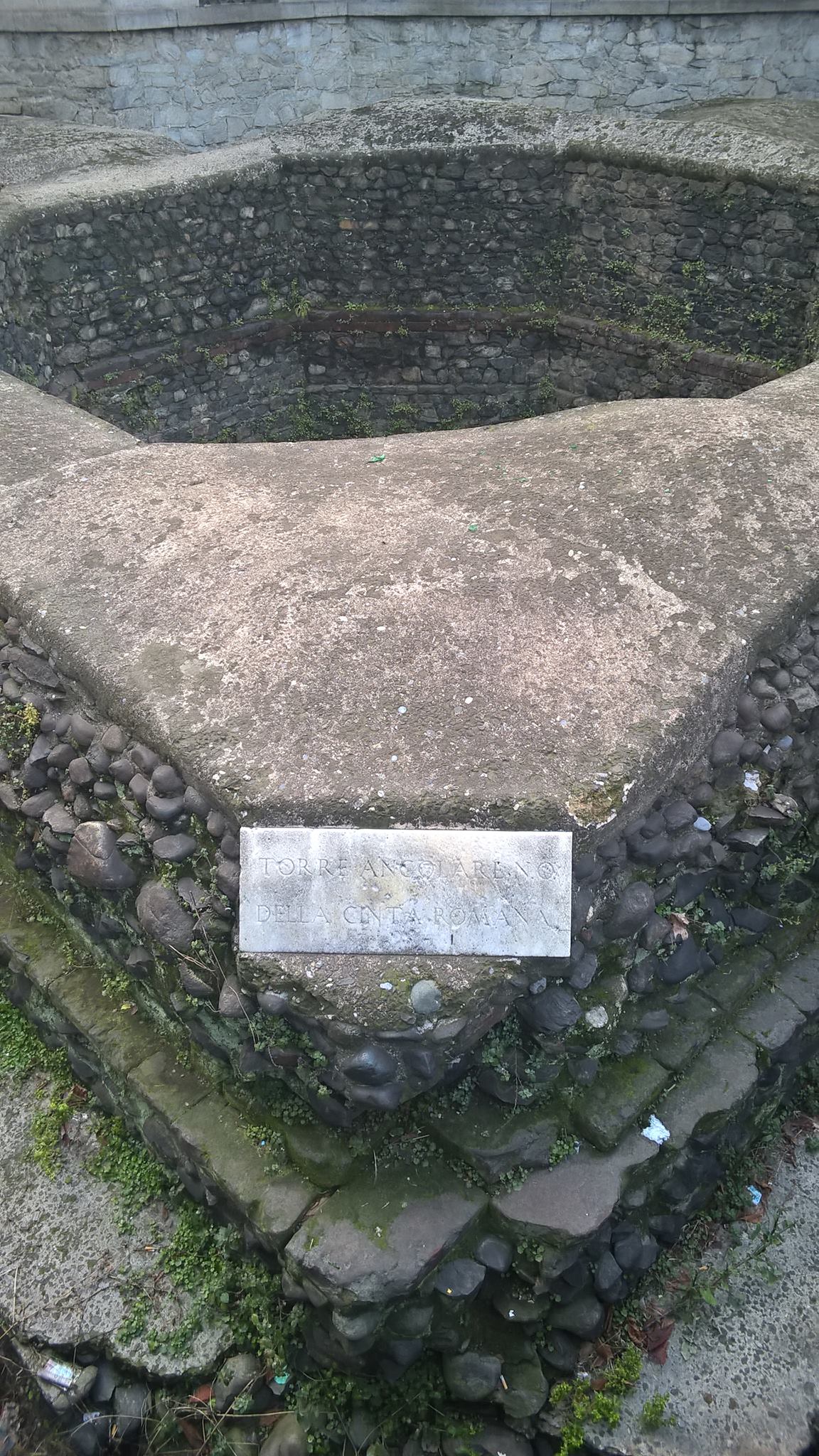 The twelwe themes/keyword chosen by the organizers of Expo2015 (Creativity, Education, Experience, Food, Future, Health, Innovation, Life, Society, Taste, Technology, World) are an obvious set of candidates for "commons" that we have to jointly manage.

But before discussing those themes, are we really confident that we associate the same meaning to each one of them?

Since November (when I moved in) I see the bit of Augusta Taurinorum perimeter shown in the picture that comes along with this segment.

Actually, it was part of the reasons to move in- far away, so close to the old inner core of Turin (yes, a loan on a movie title).

Imagine that you are a Barbarian outside the gate of that walled compound, what could be your concept of, say, "world" or "society"? Would it be the same of your opponent?

Current war footing rumors in Europe and Italy, increasingly turning into sabre-rattling, inspired a comparison between what I was taught in the Army and what happened back then.

But before talking of asymmetric commons from a theoretical perspective, let's see something more practical.

Do you remember the Tsunami of 2004 (https://en.wikipedia.org/wiki/2004_Indian_Ocean_earthquake_and_tsunami)?

The energy released on the surface is said to have been equivalent to 1500 Hiroshima bombs, at 26 megatons of TNT, albeit the overall energy is assessed to 550 million times that of Hiroshima.

During and in the immediate aftermath of the event, the number of European tourists dying due to a lack of planning and alert resources in Asian countries made us realize that, maybe, their unpreparedness for disaster management could affect us too, in a globalized world.

It was an example of "proportionate response"- jointly delivered, and based upon a shared definition of what was "common".

You probably heard of proportionate response in other contexts, such as Cold War, and its "Mutually Assured Destruction" nuclear war companion (see Craig "Destroying the village: Eisenhower and thermonuclear war" 1998 https://www.librarything.com/work/2005976/book/81996509).

What is "proportionate to the offense received"? It depends on your perspective, and could share a joke from my time in the Army (just compulsory service, I fired only for target practice exercises with three different weapons- and I am not even sure that I ever hid a target).

A movie that starts with a quote from President Eisenhower ("I hate war") probably delivers a better explanation of the concept of "deterrence", a concept embedded in "proportionate response" ("Deterrence" 1999 http://www.imdb.com/title/tt0158583).

Another quote from President Eisenhower (from 1947) is probably more appropriate: "War is mankind's most tragic and stupid folly; to seek or advise its deliberate provocation is a black crime against all men. Though you follow the trade of the warrior, you do so in the spirit of Washington — not of Genghis Khan. For Americans, only threat to our way of life justifies resort to conflict. "

Replace "Americans" with "we", or "Europeans", and you can probably find in that quote a better source of guidance than many recent speeches that (and not only from candidates for the USA Presidential elections).

There is a further element: "proportionate response" assumed a complementary vision of reality, a yin and yang, but linked to shared "rules of engagement".

Somebody would say that we in West had free press, while the Soviet bloc didn't, but that is partially true- there was always a kind of informal sharing of real news, and the jokes from beyond the Iron Curtain were well known in the West.

In our times, some of the opponents we are talking about now do not share the same concept of "shared interest", "common" that we have (see Orsini "ISIS: I terroristi più fortunati del mondo e tutto ciò che è stato fatto per favorirli (Italian Edition)" 2016 https://www.librarything.com/work/17347312/book/127413247).

We cannot use deterrence to influence their public opinion into voting out of office those that we dislike.

Caesar and Plato share a characteristic: you can read and reread them at different ages in your life, and everytime you will find something more worth thinking.

In Ancient Rome, "proportionate response" sometimes became more in line with Donald Trump's line of reasoning (if that can be considered reasoning)- mass murder and genocide, we would call it now.

There is a catch: Caesar was living in times when Rome was able to build a bridge across a river into Germany and dismantle it as a show-off, while the opponents had nothing close to those capabilities to affect Rome's side- no fear of retaliation implies no need to keep a "proportionate response" doctrine.

It took an Arminius trained by Romans to defeat Varo in the Teutoburg forest, few decades down the road.

And it is something that we are seeing now with ISIS and its siblings, where more than once there have been rumors (and reports) of former members of Western armed forces involved in training and organizing.

Still, ISIS seems to be defined more by what it isn't than by what it aims to be- as its objectives sound as realistic as Trotsky's approach to international affairs (which, incidentally, was a kind of "learning ground" for many advisors of former President Bush, the son: exporting democracy on a bayonet isn't really that much different from exporting revolution).

A recent article explained how, despite their long-term objectives, the ISIS leaders decided anyway that trading gas from a field could be done with Russian and Syrian forces- a case of Realpolitik, and of convergence on the definition of "common interest".

Let's consider another case: the fight against piracy along the coast of Africa.

Initially, it affected few. Then, it affected more, and we didn't go with the "proportionate response", rubber dinghy vs. rubber dinghy- we went ballistic and sent warships, and we also able to have a joint management of the forces- including with China.

Then, China developed its own new Sylk road using trains, and successfully delivered first to Russia, then to Spain- by land- while expanding a "defensive sealine" by actually building territory on islands.

Will it still be interested in sending its own navy for future incidents? Probably, only to train it and knowledge transfer of the operational approach of e.g. NATO as a multinational task force (something that it could use in the future)- as it would make more sense to keep using the new Sylk road to distribute its exports to the European Union.

If UK and USA use Diego Garcia, China expanded airfields and facilities on the seas- and, in both cases, this improved the ability to project force and build a "protective ring" that makes "proportionate response" feasible (i.e. if you attack me, I am around the corner and can attack you).

It sounds like the old concept of "bring them into the market, and they will become more like us", but in reality many of the proposals to "solve the ISIS&C issue" sound like an attempt to enforce two, three, five, or more different ways to arrange the Middle East.

As Orsini wrote in his book, while we quarrel between ourselves, ISIS can expand its "marketing" and attract more, turning something that could have been solved quickly (with the appropriate "symmetry" within the concept of "common interest") into something closer to yet another long-term nuisance.

Stepping away from this digression on why "commons" aren't what they look like, you can see that in each one of the cases listed (tsunami, piracy, ISIS) the key issue is making less asymmetric the meaning of the "commons": and this requires a convergence build on actions, not just broadcasting good intentions.

Nonetheless, there are plenty of areas where even the twelve "commons" adopted as themes by Expo2015 can "generate convergence" on a project-by-project or initiative-by-initiative basis.