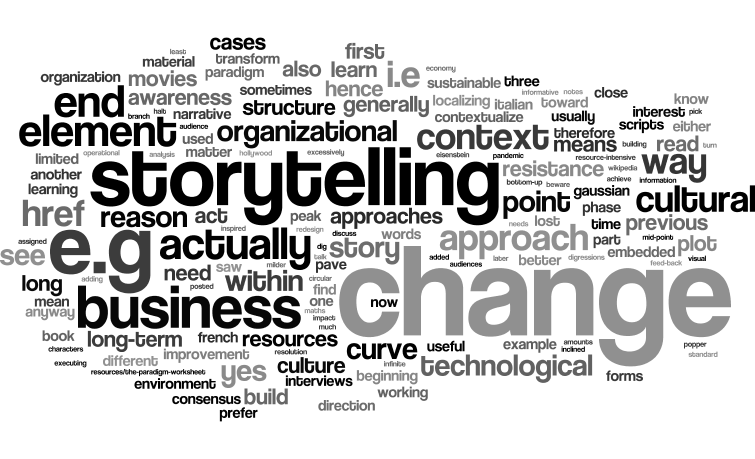 First, the last element: when I say "change", I mean "cultural and organizational change".

And, as I saw first-hand in few dozen cases in the late 1980s, any technological change that impacts beyond the immediate, specific, operational level should be approach as a cultural and organizational change.

Actually, at the micro-level, any technological change, no matter how small, had an "embedded culture": either you know it (and contextualize to your environment), or you will end up adapting your culture to the end embedded within the technology.

Background note: as a theater actor's first son, as a kid I was learning by heart scripts to act as a "feed-back" during the learning phase.

Generally, as I saw also few years later, to help a friend learn few lines, it is a lifelong skill: you learn, retain as long as needed, forget.

My main interest wasn't the dialogue, but to see the "dynamics", defined by roles, characters, the space between them, light, and, yes, words, gestures, scene-setting.

Hence, added eventually readings on Eisenstein notes on direction, Truffaut interviews with Hitchcock, and an assorted array of studies on movies (e.g. on that quixotic Fritz Lang movie where a lone hunter goes to shot Hitler).

But YouTube now makes faster, easier, cheaper to watch interviews and dig into that.

Second element: storytelling: by following through serendipity the approach that I listed before (my interest was in natural and social sciences, so complemented that part), storytelling styles by example is what you get.

And learn also that actually writing or at least localizing scripts is better way to build long-term memory of the script, usually through "mental cribs" as those derived from Bletchley Park.

Localizing and crib-based approaches tell reveal another dimension: you do not simply "translate", you need cultural awareness, i.e. to contextualize.

Yes, we are now used to "standardized culture", the Hollywood approach- but if you see "smaller" movies (e.g. "The King's Speech") or older movies (make your pick), you can see how much the storytelling could be read at different levels, if you had or hadn't cultural awareness, and in some cases actually the storytelling lost most of its impact if you did not know the context.

Down to earth, all those lessons have been repeatedly useful in my business activities, e.g. when I was Head of Training and Methodologies for the Italian branch of a French company, I translated MERISE (from French) and Yourdon (from English) material.

Anyway, the best results, those generating long-term sustainable cultural/organizational change, happened when you shifted from the mere "informative" (where you can limit the cultural adaptation, and transfer that "workload" to the audience), to the "transformative" (then, you have to "embed" within the context that you are assigned to transform).

In terms of tools, some traditional approaches to storytelling are e.g. the useful (for non-transformative storytelling) one described by Syd Field (the paradigm is available for free online, along with an example and an audio introduction, at the previous link), in turn inspired by Aristotle's Poetics (you can find on archive.org multiple versions).

The structure? Three acts, i.e. set-up confrontation resolution, with a mid-point and, close to the end of act 1 and act 2, a plot point to steer narrative direction.

The suggested approach is summarized within one of the templates provided (but I suggest to read the book- still interesting, also if I read it in Italian long, long ago): "Structure the story onto the Paradigm by first designating the Ending of the story (how you want it to end), then the Beginning, then Plot Point I, Plot Point II and the Midpoint".

There are actually various approaches, e.g. you can see previous articles I posted, and generally you will find a "standard" structure (sometimes apparently lost through digressions à la Popper).

Generally, I prefer to create a "context", by sharing information before I build a narrative.

Starting slow, building up until you reach a peak, then transform the peak into a plateau, then pave the way for phase out, and gradually close down.

Usually, this is actually completed, Hollywood-style, with a "crib" that is then used as a connecting element in other material.

If you work in business change, "defining the scope", and associated constraints, is a key element: yes, we talk about "continuous improvement", but has to be improvement within a business environment.

Therefore, it is a matter of working with limited time and limited resources.

Working with infinite resources is nice conceptually, but budget-wise it means that either you are recycling substantial amounts of unreported cash, or that you are draining resources elsewhere, e.g. by stopping sustaining your assets.

As storytelling in business change (yes, rearranged the words) has a functional value, i.e. means to an end, there isn't one-size-fits-all.

Hence, the fourth element: a Gaussian curve (bell curve, if you prefer).

Look at the visual examples on Wikipedia, and ignore the maths.

It is a function of your change needs: sometimes, you have to build a "pandemic of consensus", in order to achieve long-term change that is sustainable.

What I mean is self-reinforcing consensus scattered across the organization, or even the ecosystem, i.e. involving both your "audiences" and your whole internal and external supply chain.

Reason? E.g. as you are asking to take a quantum leap toward a completely different approach, and therefore resistance to change might need to be removed from the picture but in a way that is the organization/ecosystem itself that "mature" toward removal of that resistance, i.e. from the bottom-up, not from the top-down (e.g. current "ecological awareness" to pave the way to a less resource-intensive society: circular economy, etc).

I will let you develop the reason for other cases, but I will discuss the point in future posts- hence, my reason to share this definition as a WordBook item.

Beware: each "shape of the curve" should be part of a communication plan, and it is better supported by an analysis of the up- and down-sides.

Misguided use of storytelling in business change can actually backfire, and generate resistance to change (e.g. in milder forms, such as diffused skepticism or sneering while anyway executing, or in stronger forms, e.g. the previous plus "compulsively by the book" in an organization that before was 100% informal, bringing business to a grinding halt).