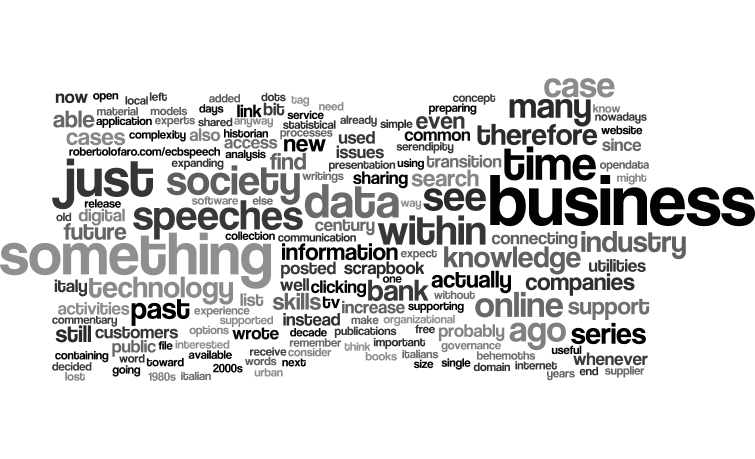 This short (I promise) post is neither about politics (the "diritto di voto" series) nor about forthcoming and future business scenarios (the "rethinking business" series).

Instead, it is within the series "Connecting the Dots Scrapbook", i.e. where I share "background" information supporting my Connecting the Dots minibooks and video series. The locals in Italy? Still wasting time and procrastinations while following their own "fantasmes".

Therefore, while preparing for a highly probable further relocation abroad, decided to expand on that "scrapbook" series - as for the Italians, will keep just collecting material ("cameos", as I call them) for future writings.

The previous two "scrapbook" items were on Argument vs. negotiation and Reverse communication a.k.a. Spinning - game theory and communication.

In my articles, books, and even Facebook and Linkedin posts visible to the public I routinely shared links and commentary on "opendata".

Just yesterday I shared a bit of commentary on Facebook about an element that many ignore when considering the transition to e.g. Industry 4.0, new models of urban mobility, and so on and so forth.

As many Italians discovered with the "privatization" of utilities that used to belong to the State or local authorities, newer technologies deliver various implementation options.

One option is to, of course, re-invent your business processes.

A cheaper option is to externalize as much as you can what isn't business critical.

And while a supplier might ask you to be paid, a consumer could actually be turned into a "remote section" of your service to... customers.

So, in many cases customers are now required to do something that in the past was done only either by customers from business environments (e.g. provide documentation whose content fairly exceed the skills and knowledge of the average customer, if they want to receive support), or by local representatives of their utilities.

In Italy, I lost count of how many cases I collected since 2012, when I became again officially resident in Italy and returned therefore to deal with banks, utilities, etc.

Anyway, this apparent ranting and digression has a purpose: most "new business models" require a relationship between supplier and customer that is nothing like XX century relationships.

You are not only producing data, you are actually being integrated within the business processes of your suppliers- and the weaker your bargaining power, the higher the chance that you will increasingly get more and more activities.

At the same time, the increase in complexity in our society and the compression of decision-making frames does not simply make more probably a further expansion of this "delegation of execution", but also something else.

If few companies will be able to grow up in size up to the point where they will do as past behemoths, i.e. have within their own organization access to expertise on most, then from service delivery to product development and support it will not be the case of few "geeks" volunteering, but something else.

The above mentioned increase in complexity implies that, also if I disagree with it, I can expect more and more specialization- as a joke I posted online a while ago, it will be a case of expanding knowledge on an increasinly narrower knowledge domain.

Up to the point where, in some case, you could claim to be one of a handful of worldwide experts in something that is impossible to communicate and, anyway, interest nobody.

On a less trivial level, instead our society will demand a proactive contribution of knowledge from all its members whenever an issue arise, so that the "citizens' swarm" can actually work as a unit.

If not now, in a decade- but I do expect to see more and more cases where fractional time from experts will be contributed for free toward a common goal, whenever the aggregate organizational cost of procuring, vetting, organizing ex-ante using a top-down approach would be prohibitive, or, better, a case of "upfront overinvestment", as the benefits could be obtained only through a lifecycle of which no single (business) party would be able see end-to-end.

As I wrote I think around a decade ago, it is a matter of "cathedral building skills"- something that we lost.

With a twist: in a society where any technology has a contracting lifespan, instead of starting to build something that will last a century, it makes more sense to consider the optimal way to build something that can be dismantled in 10,20,50 years (depends on your application), and replaced by what probably we cannot even imagine.

Decades ago, somebody in Europe decided to split airwaves in parts (the "digital transition" for TV broadcasting), so that more channels could fit within the same frequency range.

Nice- pity that, with the advent of Internet opened for commercial uses (1990s) and smartphones (2000s), and 4G (2010s), or even 5G (2020s), now there will be a re-assessment of a whole industry, and whoever purchased a Digital TV barely few years ago might be in not for a "technology upgrade", but for a "technology replacement".

The same applies for other industries, e.g. automotive and overall transportation.

But the "behemoths" (private, public) I referred to above are currently flooding in data- data that they collect for whatever governance purposes, but end up never using them.

In reality, if everybody is expanding skills that weren't available to many until recently, finding a way to bridge the "skills" (not just "digital") divide is important.

E.g. because Excel isn't enough when dealing with high volumes of data where you are looking for for the right haystack to then search a needle, and if you are writing about the history of our society, just being a philosopher or an historian with a good memory isn't enough.

Therefore, as when I prepare an article or a book I do it both to scatter "draft" of future activities and publications (a kind of "prior release" in the open domain), and to "fix" memories and ideas, since 2008 expanded the "public" side (i.e. online) sharing of my material.

Since early 2019, I started "connecting elements", derived from past blending of experience, technology, thinking (about society as well as about business), and sharing it through a website that is going to support future publications, called https://robertolofaro.com/BookSite.

Few days ago, I added a bit explaining the concept of "datademocracy" as I see it: if we have to aggregate contributions, we need to make "accessible" what we find, know that could be useful to "seed" other potential contributors, then expecting to receive, in return, what their own unique perspective can derive.

In my view, as I repeated often, "politics" is too important to be left just to politicians, and companies too are "political entities"- moreover, when we are going toward an increase in urbanization (this century, between 50% and 70% of the population is foreseen to be living in large urban conglomerations).

At the same time, "democracy" is based on being able to participate (yes, there is an old Italian song "libertà è partecipazione"): and how can you be an active part of a data-centric society if you cannot access data?

I am a lifelong bookworm, and I remember how difficult it was to cross-check even the smallest information bit, when Internet wasn't available.

Sometimes, I remember how I had a table full of books or newspapers (or xerocopies of their pages) to cross-check e.g. who said what, and therefore be able to write maybe a paragraph supported by data, as supporting evidence.

Nowadays, I still find unusual whenever I go online and, searching for something, I find a wonderful list of... PDF files to open, search, close, download, annotate.

Few days ago, the European Central Bank posted on Linkedin a link to a file containing all the speeches published, converted into a CSV file.

Well, how could I resist?

As I said locally, I know that probably companies are doing already the same, but what if a mere student, amateur historian, or anybody interested but without knowledge of tools could simply search by serendipity?

I did a first step- and used my rusty yet still useful experience in processing data for presentation to non-IT people (1980s), blended with something that I am working on to try to do with opensource software (i.e. free and "updated by a swarm") what I used to do in the 1980s, 1990s, 2000s with expensive business software suites.

So, the aim is simple: apply what I wrote above.

In this case, I selected the ECB speeches collection, as in the past I worked extensively in few countries within the industry, and I still keep up-to-date on policy issues.

Actually, as I wrote few times in the past, I think that our "by industry" governance conflicts with our new concept of "systemic"- that isn't just by industry, as new and old companies nowadays do not really need to set up an organizational structure similar to that of a bank to look as a bank, behave as a bank, without being a bank.

It will be interesting to see how regulation will evolve, but, for the time being, it is worth sharing the information and "threads" contained within the speeches.

Also if you have no interested whatsoever in banking, there are many issues, from society, to business, to technology: all discussed across the over 2000 speeches between 1997 and 2019.

The application that I posted online at https://robertolofaro.com/ECBSpeech is just a "window" on that collection, and more search options (including the "serendipity") will be added as I advance in my book-writing activities.

For the time being, this is what you can find online:

When you enter the website, you will just see a "bubble" (technically, a "tag cloud") of the most common words within the 2100+ English-language (or with English title) speeches

By clicking on the link to the left, you will be shown the list of the most common words, with the size and color (top-to-down) highlighting how frequent they are

By clicking on a single word, you can see who delivered in which year(s) speeches containing that word 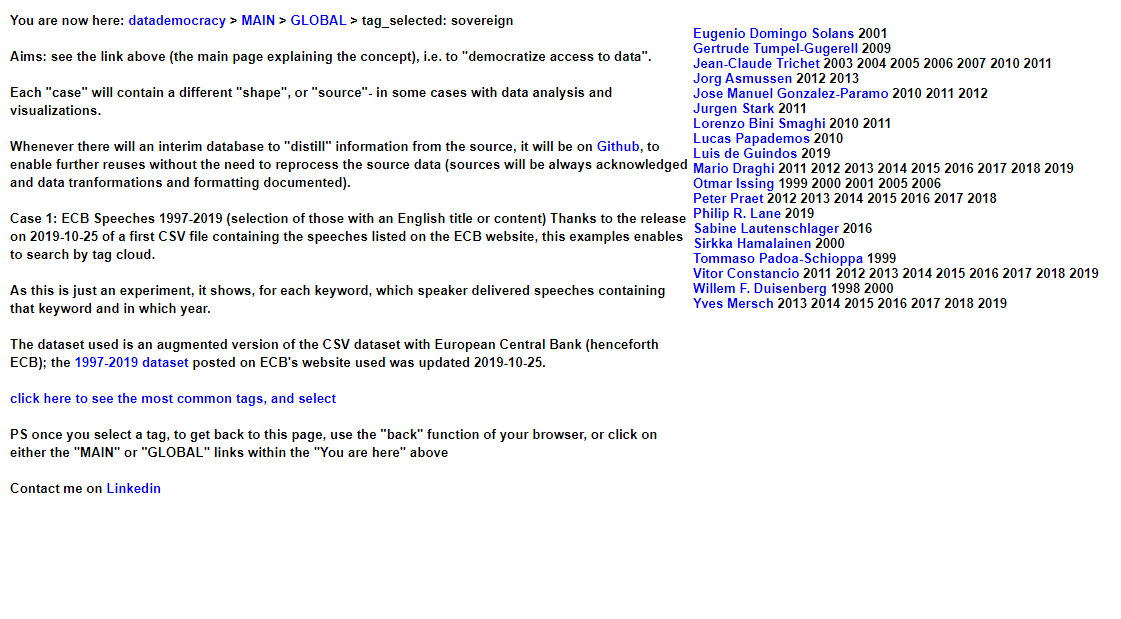 And this is were it goes so far

The next week, by clicking on a speaker's name, you will see a list of speeches associated with that speaker and tag with dates; for the time being, I cross-checked only those until end 2005, and those have a link to the original online (in some cases, there are attachments).

I plan to do some further analysis and number crunching to support my writings, and therefore I will release eventually on GIT statistical analysis and presentation scripts in R, databases in SQLite and other formats, as well as Acrobat documents describing the above.

For the time being, I am already preparing something on UN SDG statistical information, again a different format of "reporting and access to data", and on other social and business issues, supported by Eurostat and its Italian equivalent, ISTAT.